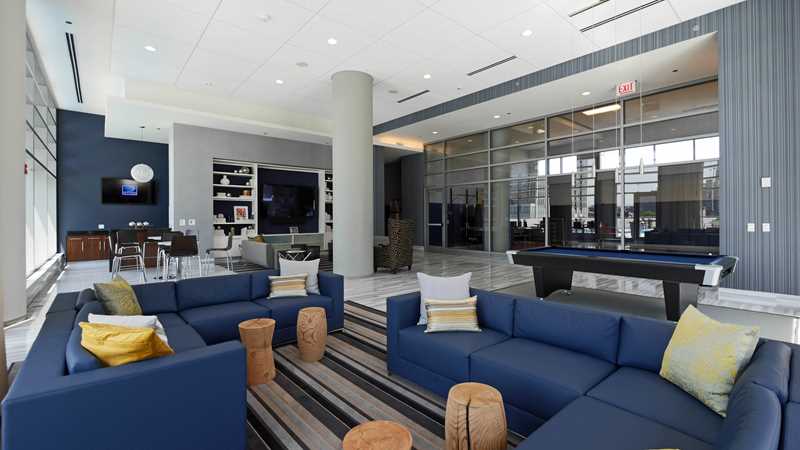 “We delivered Chicago’s premier luxury apartment building on March 1, two months ahead of schedule, and the market has responded enthusiastically,” said Randy Fifield, vice chair and principal of Chicago-based Fifield Cos. “K2 offers renters everything they need to live the downtown, luxury lifestyle. We have received excellent feedback from potential renters and the leasing numbers reflect the buzz and reputation this property has created. It truly is the peak of luxury living in Chicago.”

To celebrate K2’s grand opening, co-developers Fifield Cos. and one of the nation’s leading multifamily developers, Wood Partners, hosted a first-of-its kind K2 Designer Showcase May 1 – 3. The event, which was open to the public and featured seven models from three Chicago-area designers, drew more than 1,200 people.

“The Designer Showcase was truly an ingenious idea that Randy dreamed up and spearheaded,” said Patrick Trask, central region director for Wood Partners. “The public’s response to the three-day event surpassed our expectations and really helped build the leasing momentum that has carried the building into the summer months. As the word begins to spread from our residents, who are very eager to tout the best-in-class luxury lifestyle K2 provides, we expect this velocity to continue for the foreseeable future.”

The building offers numerous common area amenities, including multiple lounge and party areas; a state-of-the-art exercise facility complete with men’s and women’s locker rooms, steam rooms, showers, and lockers; a basketball court/yoga studio; a theater room with a 120-inch projection television system; and a business center with 10 computers and a separate boardroom for residents’ business needs.

At the center of K2’s outdoor amenity area is a 70-foot lap pool with four full-sized swimming lanes. The pool deck features four cabanas, including two that can be completely enclosed for outdoor massages or private parties for groups of six. The outdoor lounge area comes with a gas fire pit and four grilling stations that include sink space for resident cooking and cleaning needs.

Adjacent to the building, a half-acre, fenced-in dog park comes complete with a dog run and hills. The area provides both indoor and outdoor dog washing stations as well. K2 works with a third-party vendor, Urban Outsitters, to provide dog walking and doggy daycare services for residents.

K2’s latest amenity to open is the bike kitchen, a one-stop shop for cycling enthusiasts. The bike kitchen provides residents with a vending machine that dispenses bike products and Gatorade, a work stand with tools and a heavy-duty air pump.

Bicycle storage has been a top priority in the design of K2 due to the building’s proximity to downtown Chicago’s existing and future protected bike lanes. K2 has been designed to offer bicycle commuters an ideal ingress/egress point as it is grade level with Kinzie Street. The building accommodates storage for 202 bicycles in its three-story parking garage and allows for direct access from the storage facility to bike lanes. Residents do not have to navigate the parking garage to enter the city’s bike system.

“We have thought of everything our residents would need and have provided it at the highest level possible,” said Fifield. “The recent leasing numbers are affirmation that K2 is the premier rental property available in the Chicago market today.”

Residences at K2 include studio, one-, two- and three-bedroom apartments. Interiors feature luxury finishes such as nine-foot ceilings, stainless steel appliances, granite counter tops, plank flooring and Grohe fixtures. Rents range from $1,650 for a studio to $6,500 for a three-bedroom, three-bath penthouse.

Leasing at K2 began March 1 and residents have already begun moving into the building. K2 Apartments is located at 365 N. Halsted Street. For more information on leasing at K2, visit the website or call 855-886-7774.