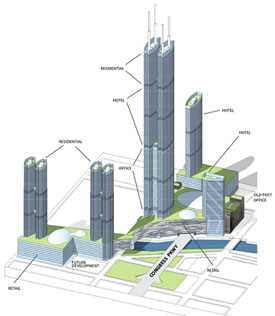 Reclusive British developer Bill Davies has come up with quite a vision for the old Chicago Post Office Building.

He sees the 2.5 million-square-foot hunk of concrete that looms over the Eisenhower Expressway as the centerpiece of a 20-acre complex that would include a 120-story office tower, a privately-owned bridge over the Chicago River, a massive retail complex, acres of green space, “speed escalators” that rise nearly five stories without interruption, more than a decade of construction—and a $3.6 billion price tag.

But Lissner said that while the Davies’ plans are ambitious, his multi-phase project would take years to finish and could benefit from an improved economy. Its advantages are that it would sit close to the expressways, the CTA Blue line and Union Station.

Despite the tough economic climate, Booth predicted, people will eventually flock to the complex because they have “an insatiable appetite for experience and excitement and places they haven’t been.”

Experience shows that it is far easier to announce plans for a towering skyscraper than to build one. Another overseas developer, Ireland’s Garrett Kelleher, promised to build the 2,000-foot Chicago Spire — only to see his dream collapse and his creditors file lawsuits demanding millions of dollars in payments. For three years now, construction on the 1,047-foot Waterview Tower at 111 W. Wacker Dr. has been halted at the 26th floor, leaving its exposed concrete skeleton looming over the Chicago River.

Booth is no stranger to controversial skyscraper plans — and to the difficulty in getting them built.

Greising on the financing for Phase One of the project:

Asked how Davies had raised the cash, Mulryan could not answer. Asked how much Davies has on hand, ditto. Asked how much it would cost to get started, he said he was pretty sure it would cost $450 million for phase one. Asked if any banks, pension funds, oil sheikhs, Chinese nouveau riche or other usual suspects had expressed interest, Mulryan said some meetings are planned.

Kamin on the financing for Phase One:

The plan, which was filed with the city Thursday, requires City Council and Plan Commission approval. If the plan is approved, the company can move ahead with the $450 million first phase within 90 days, Mulryan said.

Did Kamin and Greising talk to different Martin Mulryans?

Greising’s piece is damning, both of the developer’s “vision” and of the architect who drew the conceptual plans to visualize it. If Greising’s take is accurate, what does that say about Kamin’s?