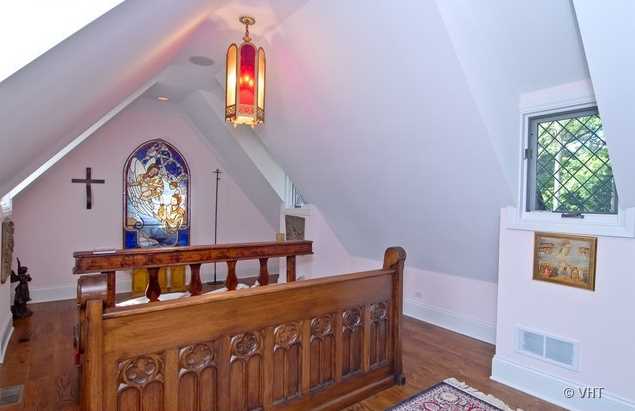 Over the years I’ve been in a number of homes that had attached private chapels, several of them capable of seating dozens of people.

The chapel pictured above is far smaller than many a walk-in closet that I’ve seen. According to a real estate agent quoted in Crain’s Chicago Real Estate Daily, the buyers plan to convert the chapel to a walk-in closet.

Real estate agents will typically not include pictures with religious overtones among the listing photos, on the theory that they might deter some buyers from viewing the property or, far worse, be interpreted as expressing a discriminatory religious preference in violation of fair housing laws.

Home stagers generally counsel clients to remove religious objects and displays before putting a home on the market. That wasn’t possible at one home I shot, where biblical quotations were carved in stone insets in the home’s exterior walls – scenes I didn’t include in the video shot at the property.

Newer Post
What’s with the garage paint at Hubbard Place?
Older Post
These developers are liars, cheaters and scammers