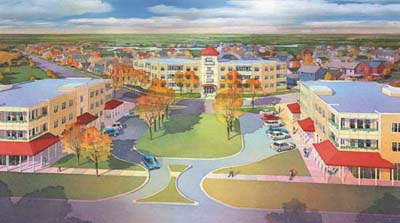 We’re intrigued by Prairie Crossing, a nationally-recognized conservation community set on 677 acres about 40 miles northwest of Chicago. Ok, on the face of it, it’s a case of a developer turning prairie land into a 395-unit residential project. But when you look past that, the developer seems to have a genuine social conscience. We’ve all gotta live somewhere, right?

The community was founded by George and Victoria Ranney, who point out that they could have built “thousands of homes” at Prairie Crossing, but restricted themselves to 395. I guess we can call that a compromise.

And the homes themselves couldn’t be much greener: the developer has apparently installed energy efficient furnaces, appliances, windows and walls, and used paints and sealants that are low in volatile organic compunds.

So what’s up for grabs? Prairie Crossing has been around for more than a decade, and the 359 single-family homes sold out a long time ago, but the developer is now selling 36 new-construction condos in three buildings at a subdivision, The Condominiums at Station Square. The two- and three-bedroom condos start in the $320s. That’s getting a little pricey, but maybe that’s the trade-off for living in a home constructed using environmentally-friendly technologies. The buildings were designed by Worn Jerabek Architects, a Chicago firm noted for its environmentally-sensitive work.

The development also will include shops and restaurants. We doubt they’ll see a Bennigan’s crop up because the PC seems to be all about being PC and supporting local farmers. A farmer’s market within the community sells locally-grown organic produce, honey and eggs.

Homebuyers also will have access to a garden, an organic farm, a stable and pastures, a lake, 10 miles of multi-use trails, and the 3,200-acre Liberty Prairie Reserve.

A community center, housed in a restored 1885-era dairy barn, hosts a variety of concerts and gatherings. Heck, the place even has its own charter school.

The many different elements of the community are connected by footpaths that eventually lead to the Metra stations at Libertyville and Prairie Crossing. The goal, of course, is to keep people on their feet and out of their Hummers.

And here’s something in short supply at many condo developments: the community is organized according to a long list of very worthy-sounding principles. These include healthy living, environmental protection, economic and racial diversity, energy conservation, efficient transportation and economic viability. Most developments, of course, are only guided by the last.

Only time will tell if Prairie Crossing will spark a full-blown revolution. Until then, we’ll jump in our Hybrid and salute a community where the word ‘green’ doesn’t just refer to the Benjamins.