Here we go again, subverting acceptable notions of neighborhood boundaries simply to suit our selfish purposes. But this unit in the Picardy Place subdivision at 1800 West Diversey — a three-level townhouse with three bedrooms and three and a half baths with a total 2,145 square feet, pops up in a search for “Lincoln Park” properties, so we’ll go with the fiction that it is in Lincoln Park. Kenneth Arriazola from Baird & Warner has it listed at $480,000, with 2005 taxes at $6,695.85 It’s vacant, and according to the listing, has been on the market for more than six months.

When Picardy Place was built in 1996, on part of the old Stewart-Warner property off Diversey, some observers looked at it as a shining example of one of the worst — and most anti-urban — trends in urban development, the in-town gated community. The intervening decade has brought the city more and more of these — although the astounding conversion of the Paulina corridor to the east from industry to high-end residential seems to have been accomplished with nary an electric gate. We are sorry to report that the years haven’t improved the concept, and PP’s location and configuration are such that, now more than ever, it feels as if it’s been scooped out of the Schaumburg landscape and magically tele-ported to this spot in “Lincoln Park.” 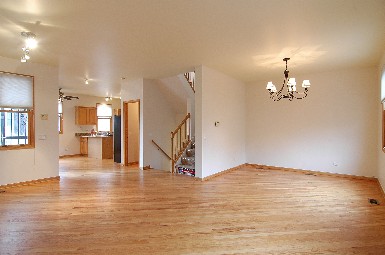 That said, the unit itself is very appealing. Diagonally laid oak floors on the main level give it real distinction, windows on three sides give it lots of light, and there’s a woodburning fireplace you would actually use.

The treatment of the kitchen gives you a short course in the most current history of residential marketing. Ten years ago, the now-mandatory stainless appliances and granite counters weren’t widely found in modestly priced places [which these were], so the current owners have made the upgrades to meet the rest of the market. 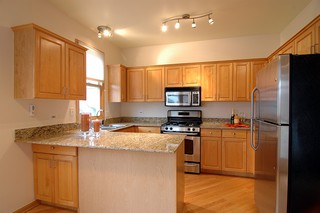 The place is described as having three bedrooms, but the third “bedroom” is actually the ground level — a large space that’s really more like a family room than a bedroom, leading to a postage stamp outdoor space. with a full bath on the same level. On the skylit top floor are two bedrooms and two baths. One plus to this unit is that there’s extra storage space in the garage [only some of PP’s units feature this], which is a good thing because closet space is scarce here.

The most unfortunate feature of this unit is its location. It’s not simply that it’s so far west and within walking distance of nothing but the Starbucks at Paulina, the Metra North Line tracks are directly to the east of the house. Oh, we know, anyone you talk to says it’s like “white noise” and “you get used to it.” But here’s the question: do you really want to “get used to it?”