And the granddaddy of all downtown condo sales, at least for now, is…drum roll please…an $8 million condo on the 18th floor of The Mayfair, 189 E Lake Shore Dr. Koenig and Strey’s Joanne Nemerovski recently sold the lavish home, which originally listed for nearly $9.9 million.

According to her, the sale represents a record price for a Chicago condo. We weren’t able to verify that, but the 7,549-square-foot pad is certainly the crown jewel of LR Realty’s $60 million renovation of the former Mayfair Regent Hotel in 1998. In addition to a fairly stunning interior, the new owner has 2,360 square feet of outdoor space and another 660 square feet of indoor space located on the 20th floor.

The former Nancy Abrams, now remarried with the name Cohen, sold the condo. She was the wife of Bruce Abrams, of LR Development, which developed some of the area’s highest profile residential projects, including The Park Tower, Fort Sheridan, The Regent and The Mayfair. The Mayfair is one of just eight buildings on ultra-tony East Lake Shore Dr, which Yo has been profiling this week. Abrams tragically jumped to his death from the building in 1999 at the age of 38.

You missed this particular opportunity to spend that $8 million burning a hole in your pocket, but Baird and Warner would be happy to relieve you of $4.95 million, which is what it will take to buy The Mayfair’s three-bedroom 1W unit, complete with a wood-paneled library (pictured below) worthy of Captain Nemo. 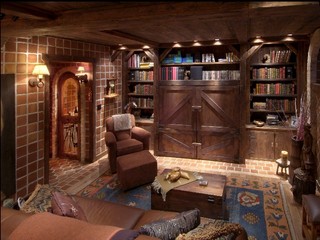