Metro Chicago condo sales surged in May, highest since 2006 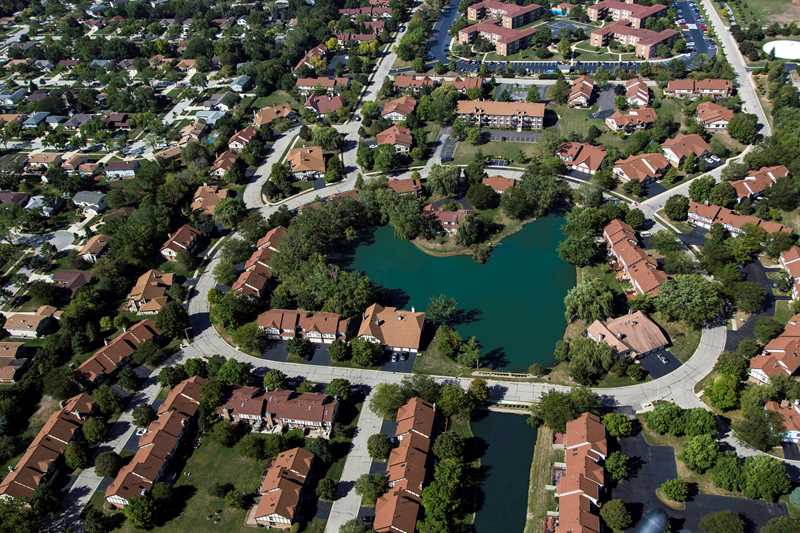 A renewed appetite for condominium purchases has become apparent in the metro Chicago real estate market through the first five months of 2013. That trend was especially clear in May when a 35 percent increase in sales of attached homes (primarily condominiums and townhouses) helped the overall residential market post a 30 percent gain in total sales when compared to May of last year. The detached-home segment of the residential market registered a 27 percent sales increase.

The month’s sales total of 10,822 units was the largest for May since 2006, and not only were more homes selling, but the pace of sales quickened considerably. For homes sold in May, the average number of days spent on the market before finding a buyer fell to 115 days from 160 days a year earlier.

The faster pace of home sales has substantially reduced the inventory of for-sale listings. At the end of May, the total inventory of listings was approximately half as large as it was just a year earlier. Based on the May sales pace, there is currently a three-month supply of homes on the market. A year ago, there was a six-month supply.

This tighter inventory and rising demand, coupled with mortgage interest rates that are less than 4 percent for many borrowers, led to a solid increase in home values across the seven-county metro Chicago area. The median sales price in May was $185,000, up 8 percent from the $171,000 median price recorded in May 2012.

Another factor helping to boost prices was the declining percentage of sales involving distressed properties (foreclosures and short sales). They accounted for 33 percent of May sales, down from 37 percent a month earlier and 36 percent in May of last year.

The median home sales price for May rose in all seven metro counties and in the City of Chicago. In fact, Chicago recorded the biggest increase, a 16 percent gain to $231,025, up from $199,000 a year earlier. 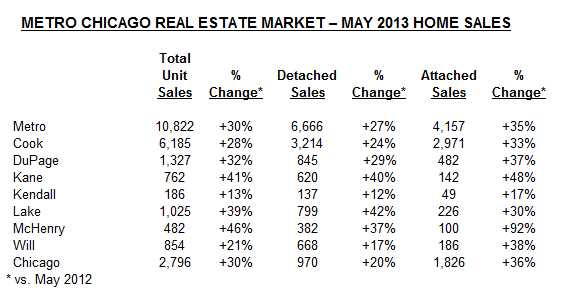 Average market time for homes sold in May ranged from a high of 136 days in Will County to 109 days in Cook County and just 94 days in Chicago.

Attached Homes
The 35 percent increase in the number of attached homes sold in May and a reduced inventory of listings in the metro area helped generate an 8 percent rise in the May median sales price to $150,500. The average market time shortened to 116 days compared to 168 days in May 2012. During the month, 4,157 attached units changed hands in the metro area.

Detached Homes
May sales activity resulted in increased transaction volume and a higher median sales price for detached homes in all seven counties and in Chicago. For the metro area as whole, detached sales totaled 6,666 units for the month, up from 5,234 in May of last year, a 27 percent increase.

Sales activity was especially robust in Kane County (up 40 percent to 620 units), Lake County (up 42 percent to 799 units) and McHenry County (up 37 percent to 382 units). Gains elsewhere were as follows: Cook County sales totaled 3,214 units, a gain of 24 percent; in DuPage County the gain was 29 percent on 845 sales; in Kendall County, 137 homes were sold yielding a 12 percent increase, and in Will County, sales rose 17 percent to 668 units. Chicago registered a 20 percent gain with 970 units sold.

Significant increases in the median sales price were registered in all seven counties and in Chicago during May, ranging from 5 to 14 percent when compared to May 2012 levels. Will County led the way with a 14 percent gain to $199,000, and Kendall County also posted a double-digit increase, rising 12 percent to $204,000.