Metro Chicago home prices, sales volume up and days-on-market down 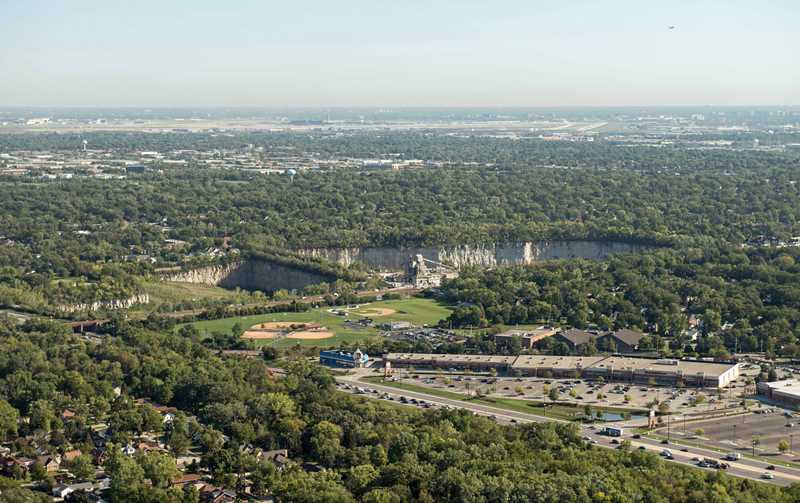 Home sales and prices were higher in February in the seven-county metropolitan Chicago real estate market, according to an analysis by RE/MAX. The number of homes changing hands increased 21 percent and the median price of a home sold last month climbed 4 percent when compared to February of last year.

In its analysis of home sales reported by Midwest Real Estate Data, LLC, the regional multiple listing service, RE/MAX found that February home sales totaled 5,843 units, up from 4,840 a year ago, while the median price advanced to $141,000 after coming in at $135,900 during the prior February. The average market time, which is the time that a home sold in February spent on the market before a sales contract was signed, fell from 175 days in February 2012 to 143 days this year.

“The real estate rebound continues, with higher home prices, fewer days on the market and a shrinking inventory of distressed properties. All are excellent signs that the housing market and the local economy are continuing to strengthen,” said Laura Ortoleva, media spokesperson for the RE/MAX Northern Illinois real estate network.

Sales activity rose in each of the seven counties in the metro area during January. Lake and McHenry counties led the way, each with a 37 percent increase. The other gains were 34 percent in Kendall County, 25 percent in Kane County, 24 percent in DuPage County, 17 percent in Cook County and 8 percent in Will County. For the City of Chicago, sales were up 10 percent.

Sales of distressed properties (foreclosures and short sales) accounted for 49 percent of all February sales, the same percentage as in January but down from 53 percent in February 2012. 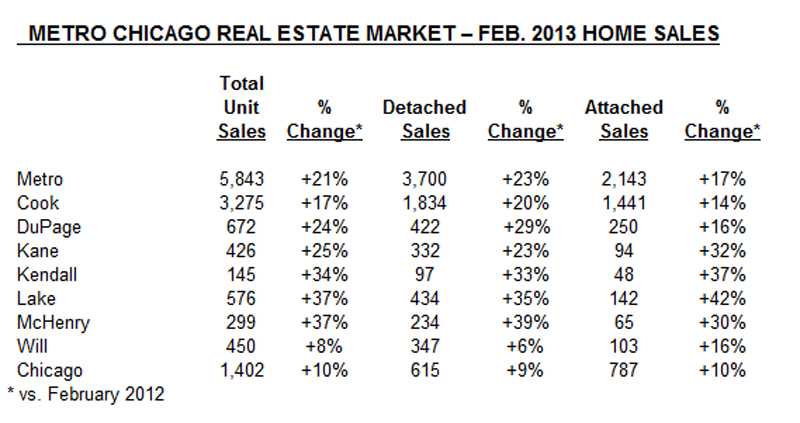 Detached Homes
Signs of a strengthening market were widespread in the detached-home segment during February. Compared to February of 2012, sales activity last month climbed 23 percent to 3,700 units, and the median price was up 3 percent to $157,750. Average market time fell to 146 days from 163 days a year earlier.

All seven metro counties, as well as the City of Chicago, showed gains in detached sales activity. The median price rose in six counties and in the city. The largest percentage increase in sales by county was in McHenry, a 39 percent gain, with Lake next at 35 percent. The other results were as follows: Cook was up 20 percent; DuPage rose 29 percent; Kane gained 23 percent; Kendall climbed 33 percent; Lake added 35 percent, and Will increased 6 percent. Sales in Chicago were 9 percent higher.

Attached Homes
Clear signs of a rebound could also be seen in February for the attached-home segment of the metro Chicago real estate market. Sales volume rose to 2,143 units, 17 percent more than in February 2012. The median price climbed 8 percent to $115,000, and average market time shortened to 138 days from 194 days.

All seven counties had higher sales volume in the attached-home segment, with four of the collar counties showing the most robust gains. Sales activity increased 42 percent in Lake, 37 percent in Kendall, 32 percent in Kane and 30 percent in McHenry when compared to sales in February 2012. Transactions increased 16 percent in DuPage and Will counties and 14 percent in Cook County, while in Chicago sales were up 10 percent.

Even though Chicago trailed in terms of increased sales, the city led when it came to higher prices. The February median price of an attached home was 21 percent higher in Chicago ($199,000) and 13 percent higher in all of Cook County ($130,000) than it had been a year earlier.

Average market time for attached homes continued to shorten across the metro area, but that was particularly the case in McHenry County, which saw the average fall 50 percent from 212 days in February 2012 to just 108 days this February.