Metro-Chicago sales down, prices up in February 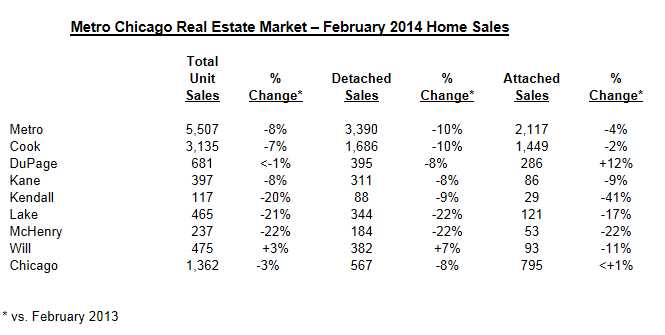 Residential sales in the seven-county metropolitan Chicago real estate market during February followed a pattern similar to that established in January, with prices rising but the pace of sales slowing when compared to the same month last year, according to an analysis by RE/MAX.

The continuation of bitter winter weather and a smaller quantity of homes for sale appear to be the primary factors causing reduced sales activity. Mortgage interest rates, which remain comfortably under 5 percent for 30-year fixed-rate loans, continue providing stimulus to the housing market.

The median sales price of all attached and detached homes sold in the Chicago area last month rose 13 percent to $157,900 when compared to the results for February 2013, while the number of homes changing hands dipped 8 percent to 5,507 units. Homes sold in February spent an average of 110 days on the market before going under contract – or 33 days less than a year earlier.

There were 29,483 homes listed for sale at the end of February in the metro area. That is 2.5 percent more than at the end of January but 12 percent fewer than in February 2013. The RE/MAX analysis is based on sales data for attached and detached homes gathered by MRED LLC, the regional multiple listing service.

Homes sold as foreclosures or short sales accounted for 45 percent of February sales this year compared to 49 percent a year earlier. Sales of this type tend to peak as a percentage of total sales during the winter months. Foreclosed properties alone accounted for 33 percent of all February home sales. The median sales price for a foreclosure was $85,000, 9 percent more than a year ago.

Among the seven metro counties of Cook, DuPage, Kane, Kendall, Lake, McHenry and Will, six saw the median sales price of a home rise in February.

The median price rose 16 percent in Cook, including a 12 percent increase in Chicago. Other gains were 14 percent in Kendall, 10 percent in DuPage, 8 percent in Kane, 6 percent in McHenry and 5 percent in Will. Lake County’s average price fell 9 percent.

Home sales activity fell in six of the metro counties and in Chicago. Will County was the exception, with 475 completed sales yielding an increase of 3 percent when compared to February of last year.

The county-by-county results for attached home sales, comparing February 2014 with February 2013, are as follows:

February sales of detached homes in the seven-county area totaled 3,390 units, 10 percent below the total for the same month last year. The median sales price rose 11 percent to $174,000. Average market time fell to 114 days from 146 days a year earlier.

The county-by-county results for detached home sales, comparing February 2014 with the same month in 2013, are as follows: