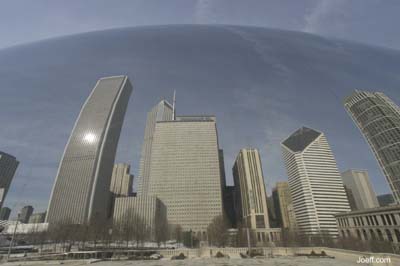 Close to three years after it was unveiled, Anish Kapoor’s monumental sculpture, Cloud Gate, will be completely open to the public. City officials say that the Millennium Park sculpture will be finished by mid-April, and that a formal dedication is planned for May. They also say all dates are approximate.

Currently, Cloud Gate’s “omphalos,” the 27-foot high vortex underneath the sculpture, is enclosed in clear plastic and inaccessible to the public. Workers began dismantling the clear plastic barricades, and the construction staging area, on Monday. This process is expected to last one week, and after everything is cleaned up and repaved and all of that, the sculpture will open to the public on April 17.

Cloud Gate is one of the world’s largest outdoor sculptures at 66 feet long, 42 feet wide and 33 feet high. It weighs 110 tons. Its surface is forged of a series of 168 highly polished, 3/8-inch stainless steel plates. When the park opened in July 2004, the welding of the 168 plates had not yet been completed, and the seams remained visible. Since January 2005, workers have been grinding, sanding, polishing and buffing the seams to a mirror-smooth finish. The process was completed on the exterior of the sculpture in August 2005. Work has continued on the omphalos since October 2005.