Neighborhood markers a sign of the times in Lincoln Square 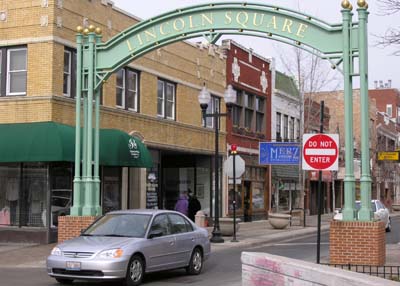 In case you were wondering, you just entered LINCOLN SQUARE! Obnoxious markers like the one above have popped up in various neighborhoods in recent years, marking more than anything else, steady progress down the path to Disneyfication in Chicago.

They’re usually silly from a design standpoint. Everything from the choice of a font to the pillars reminiscent of vintage lampposts in this one conveys a sort of old timey, aw-shucks, Hometown USA vision that apart from being aesthetically poor, feels completely false in a great urban center.

But these markers are a bad idea on another level too. The very notion of clearly delineating neighborhoods in this way runs counter to the fluidity and dynamism on which urban neighborhoods thrive. Is it easier to market Lincoln Square and draw customers with this sort of identification? That’s part of the reasoning behind The Lakota Group’s strategic plan for the area, but Lincoln Square was thriving without the green arches, which are posted at Leland and Lincoln and a block north, at Lawrence and Lincoln.

Much of the growth in Lincoln Square has been south of Leland, and residents think of blocks of Lincoln as far south as Montrose as part of Lincoln Square. The idea of what constitutes the square has spread out as the commercial district has grown in the organic way that retail strips do in big cities. Why cordone off one block of Lincoln with this official label?

Sure, the signs draw attention, but they do it in a fairly gaudy way and in one that detracts from the natural charm of some beautiful vintage buildings (actual vintage, not faux like the markers). The banners that so many neighborhood groups hang from lampposts are much less obtrusive and much less expensive. They’re also a much easier way to highlight cohesion and identity and can expand or contract in an area over time.

The permanent markers favored by the city and The Lakota Group look dated the day they’re installed, and unless we want to resurrect Riverview, we’re better off without them. 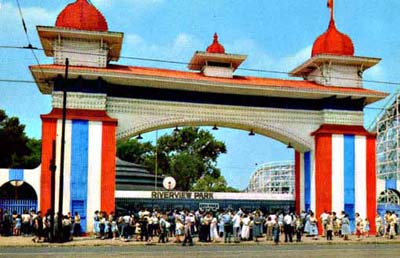