I’ve been sifting through some of the new construction listings in Roscoe Village over the last couple days and decided to cruise up to the neighborhood on Tuesday to see if there’s anything we’ve overlooked. Here’s a rundown of what I found: We’ve written a couple of posts on the sleek green development at 2041 W Roscoe St (above), which, judging by the construction workers hustling around it, still is not 100 percent complete. Just its penthouse is left on the market: a four-bedroom / 2.5-bath listed for $1.45 million. The price was reduced from $1.65 million in early May. Grace Sergio of Sergio & Banks is still marketing two condos at 2303 W Roscoe St (right): a three-bedroom / two-bath that dropped from the $520s to the $470s back in February, and a three-bedroom / two-bath penthouse that has remained in the $500s since it first went up for sale. Both homes have spa baths, custom chef’s kitchens, front and back decks, and oak floors throughout.

The sign outside 3203 N Oakley Ave (bottom left) says the development is 75 percent sold, but according to the MLS, just one three-bedroom / four-bath home on the top floor remains unsold. Conlon Real Estate‘s Timothy Sheahan has it listed in the $690s.

3340 N Damen Ave (bottom right) does not appear to be occupied yet, but there are two units on the market: a four-bedroom / 2.5-bath duplex down unit priced in the $610s, and a two-bedroom / two-bath penthouse in the $470s. Richard Kasper, also of Conlon, has the listings. 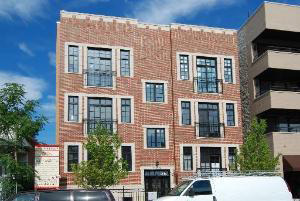