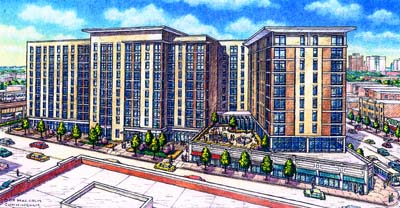 Holsten Real Estate Development has broken ground on Wilson Yard, a five-acre mixed-use project in Uptown that was discussed, debated, derided and demanded for several years before finally getting off the ground.

The $115 million development will include a large new Target store, an ALDI food store, 30,000 square feet of smaller retail, a 99-unit rental building for seniors (pictured above) and another 78-unit rental building — all between Montrose and Wilson along the elevated train tracks west of Broadway. Both of the rental buildings are “affordable” and ALDI and Target aren’t exactly upscale shopping, but lots of neighborhood residents still are wary of Uptown becoming Yuptown.

The rentals are “affordable,” but that’s defined as being within range for a family of four with an income in the mid-$40,000s. Some affordable housing advocates would have liked to move that number south, but they can’t complain too loudly about building housing for teachers, city workers and others in this income bracket who are being priced out of Uptown. The fans of gentrification would have liked to see no affordable housing at all in the mix, but these sorts of “affordable” units are a much better option than SROs units in their eyes.

In the end, each side got some of what it wanted, and neither was completely satisfied. In other words, the process seems to have worked.