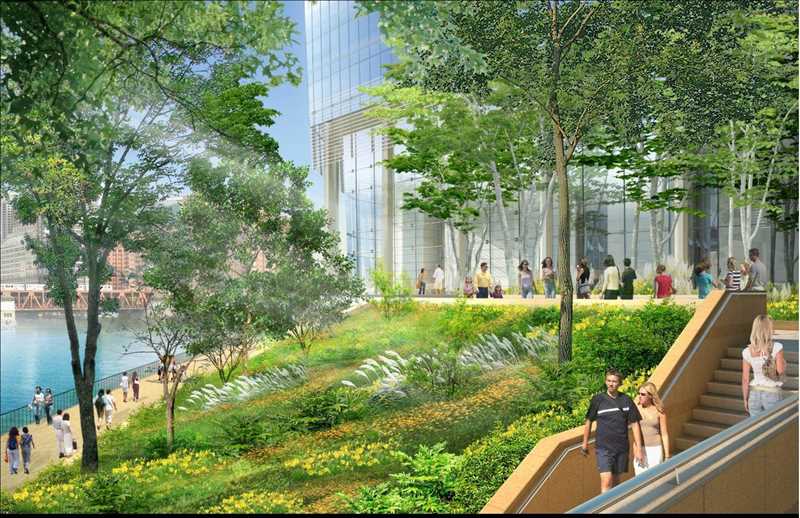 The development team for Wolf Point unveiled a plan Tuesday night for a stunning, signature proposal for the long-dormant property at the junction of the north, south and east branches of the Chicago River.

The three-phase project includes three towers – a residential building on the western portion and two commercial buildings placed to the south and east. The proposal also provides for a public park and open space, and a major improvement and enhancement of the river walk. The new section of river walk will begin west of the Orleans Street bridge, extend along the entire perimeter of the site where it ends just south of Kinzie Street, adjacent to the north branch of the Chicago River. 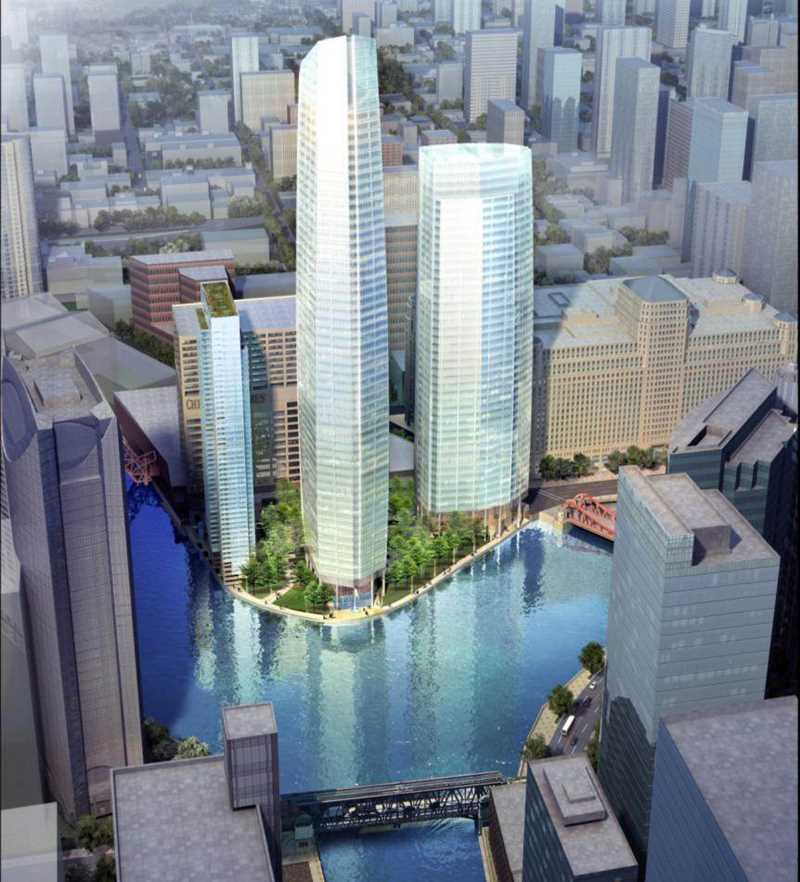 Hines, in partnership with Kennedy Enterprises and Magellan Development Group, and with their architects Pelli Clarke Pelli Architects, bKL Architecture and Wolff Landscaping Architecture, presented the plans at a community meeting hosted by Alderman Brendan Reilly of the 42nd Ward.

“The Wolf Point project is a major investment in the city and its future. The project demonstrates the growing momentum of the economic recovery here in Chicago. It’s a world-class proposal for one of the most unique sites in the entire country,” said Chis Kennedy. “We have put together a superstar team with the track record and the plan to enhance this exceptional site and fulfill more than a century of planning for Wolf Point.”

The first phase of the proposed project is a 525 foot-tall residential building with 500 luxury rental units on the western portion of the property. The east building is designed as a 750 foot-tall commercial building. The signature south building will also be a commercial building and will reach up to 950 feet tall. Building coverage will be 22% of the total site area, with extensive parks, the 1,000 foot river walk and other public spaces covering the majority of the nearly four acre area.

“Reviewing the history of Wolf Point and planning documents created over the last 100 years, it was clear that a significant, multiple-building, signature development is the highest and best use for the site,” said Fred Clarke with Pelli Clarke Pelli Architects. “The design principles for Wolf Point evoke the timeless architecture of Chicago’s best buildings. We are particularly excited about the new river walk, parks and open spaces that we have integrated into the proposal.”

The development is an investment of more than $1 billion in Chicago and is expected to create 2,000 construction and permanent jobs. No public incentives, subsidies or tax increment financing will be part of the project financing. When complete, the project is expected to generate more than $35 million in new public revenue through property and other taxes, annually.

“It truly is an amazing location. It has unparalleled access to both CTA rail and bus lines, as well as the two main Metra hubs. It is one of the most walkable locations in the city with easy access to both the Loop and River North,” noted Greg Van Schaack, Senior Managing Director with development firm Hines. “For more than one hundred years, city planners – from Burnham in the early 1900s to several Central Area Plans dating to 1959 – have all called for prominent buildings and urban density at the site, and we are very eager to finally realize Wolf Point’s full potential.”

Zoning for the site has been in place for nearly 40 years through the establishment of a planned development in 1973, which was subsequently ratified by the City of Chicago in 2004 and 2012. Kennedy Enterprises and Hines will submit an amendment to the planned development for approval that reflects the proposed buildings, river walk and open space. The project design contains less square footage than what is allowable under the current planned development.