We asked one prominent South Loop developer how sales have been at his latest project, and he told us, “Great, until about six months ago, when they haven’t been.” The real estate market was showing signs of slowing even before the sub-prime mortgage meltdown, which has hit residential sales hard.

You’d never know that, however, from taking a ride through the South Loop, which remains a sea of construction sites. In mid-October, New Homes counted around 40 significant residential developments, totaling more than 2,300 units, underway in the South Loop. Many of those homes have sold, and the developments range from buildings that have not yet broken ground to properties that are complete and offer nearly immediate occupancy.

High-rise haven
Once considered the place for bargain hunting downtown, the average price point in the South Loop has risen along with the average height of residential developments. Nearly everything under construction in the South Loop these days is a high-rise, though occasional loft conversions and townhouse projects still pop up. But developers point out that even with recent price gains, comparable product in north lakefront neighborhoods such as Lincoln Park and Lake View is more expensive.

That average includes mostly resales. In the new-construction market, some condos are available for less than $200,000, but they’re increasingly difficult to find. CMK Companies has one-bedrooms of 656 to 817 square feet priced from the $190s at its new 235 W. Van Buren St. development, a planned 46-story tower designed by Ralph Johnson, of Perkins & Will. CMK also had units priced from under $200,000 at its 1720 S. Michigan Ave. project, where 60 of nearly 500 condos remained for sale in October.

Loft living
Most new construction in the neighborhood is priced from $350 to $600 a square foot, according to Keith Giles, a principal in Kargil Development and co-founder of Frankel & Giles Real Estate, though Giles is marketing loft condos priced under $300 per square foot at Prairie District Lofts, 1727 S. Indiana Ave.

Lofts have become rare in the South Loop development scene, mostly because so many industrial buildings already have been converted. The limited supply of lofts in the neighborhood is good news for owners when it’s time to sell, but bad news for those who want to buy into loft projects. Several prominent loft developments are underway, however. 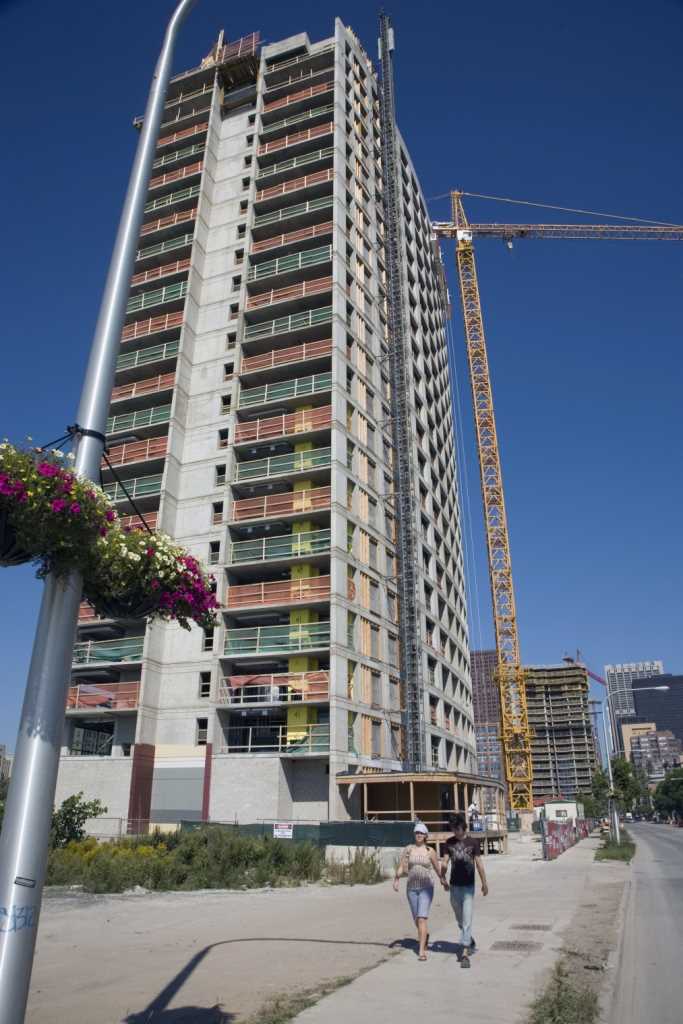 Eco18, 1818 S. Wabash Ave., also is touting its “green” features, as you might have guessed form the name. This 93-unit condo development, where homes were priced from the mid-$200s to the upper-$500s in October, will employ the largest geothermal energy system of any residential project in Chicago. “Condo residents here will pay about 40 percent less in energy costs, which is a substantial savings,” developer Rick Turner said.

Hot design
The move toward green design at some projects is occurring alongside a new push for modern towers, heavy on glass, steel and clean lines. That’s welcome news for a neighborhood whose earliest high-rises suffered from sameness.

“Vetro,” the name of a 31-story tower at 611 S. Wells St., is Italian for “glass,” and the sleek high-rise lives up to the moniker, with floor-to-ceiling windows and an illuminated base and cap. Terrapin Properties’ 28-story Burnham Point tower, underway at 720 S. Clark St, also is heavy on glass, and Park 1000, a 40-story complex at 1000 S. Michigan Ave., will add a new flash of glass to the famous Michigan Avenue street wall in a building with strong vertical emphasis.

Kargil Development’s X/O Condominiums, a pair of towers that will lean seductively toward and away from each other as if doing a tango, at 1712 S. Prairie Ave., is one of the most adventurous designs the neighborhood has seen.

Design also has matured at The Enterprise Companies’ Museum Park community, which stretches from around Roosevelt Road to 19th Street and in October included half a dozen active high-rise developments. The community dominates the neighborhood to the east, offering hundreds of condos at price points ranging from the mid-$200s for a one-bedroom to seven figures for jumbo units on high floors.

The first condos at Museum Park sold for $300 a foot or less in buildings with impressive common amenities but run-of-the-mill designs. The most recent homes at One Museum Park have been priced from the $420s to more than $800 per square foot in towers with some of the South Loop’s freshest architecture.