Quote of the day: Where we’re going 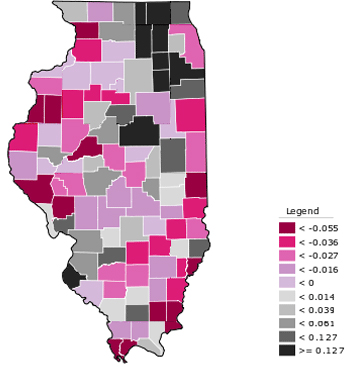 Aaron Renn of The Urbanophile digs into the new Census numbers at NewGeography.com:

The non-Hispanic White Only population of the city actually declined by 52,449, or 5.78%. The “minority” population declined even further, -147,969 or 7.44%, meaning the city actually grew its white population share by 0.38 percentage points, perhaps indicating the early stages of the “Europeanization” of Chicago as the core gentrifies and disadvantaged groups and the white working class are pushed further to the fringe.

Indeed, the Black Only population plunged by 177,401 as blacks increasingly moved to suburbs, especially southern ones like Matteson, Lansing, Calumet City, Park Forest, and Richton Park, each of which added thousands of new black residents. Some indications are that a significant number of black residents left the region altogether. The traditional black magnet of Atlanta – which struggled through much of the decade – was a top five destination for people leaving Chicagoland over the past decade, and Chicago was the #2 source of in-migrants to Memphis, another black hub, according to IRS data.

Hispanic population was the bright spot for Chicago, as the city added Hispanic residents to the tune of 25,218, or 3.35%. Hispanics boosted their population share in the city by nearly 3 percentage points. But even this growth isn’t that impressive. The city of Indianapolis, at less than a third Chicago’s population, added over 45,000 Hispanics on a much smaller base.

Renn’s map shows population changes by county over the past decade.