Regatta sells out without selling out 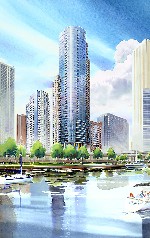 If you’re doing 50 miles an hour on the Drive, there are only about four seconds during which you can peer into Lakeshore East, the new residential development on a former nine-hole golf course immediately south of the river, to check on progress. As anyone who’s almost careened off the road for a peek knows, construction has proceeded at a dizzying pace. The developers announced today that The Regatta, the second condo tower, at 400 E Waterside Dr, is officially sold out.

Construction is not yet finished and the jury’s still out, but our instinct is to give a tentative thumbs up to this building, designed by DeStefano & Partners. The 44-story tower features a bold glass curtain wall that curves along the river and folds into masonry sides. It’s no 333 Wacker, another riverfront highrise with a curved glass curtain wall and a collage effect that might be characterized as postmodern, but then again, what is.

Any comparison with 333 Wacker, one of the city’s great modern masterpieces, is probably unfair, though it’s hard not to compare The Regatta with the River View towers DeStefano designed for The MCL Companies, across the river, in River East. Those buildings are quite different from The Regatta, but the western River View tower expresses a similar idea, with its signature glass turret. In terms of color, materials and proportions, the River View towers have both unity and integrity.

It’s not entirely clear that the collage effect of The Regatta will be as successful, but for now, we’re giving it the benefit of the doubt. It’s hard not to like this voluptuous glass shoulder nudging toward the river, and that’s what most observers will remember. Looking at the bland buildings that Lakeshore East developers Magellan and NNP Residential & Development built in River North, one has to feel some relief that the new towers have gone in another direction.