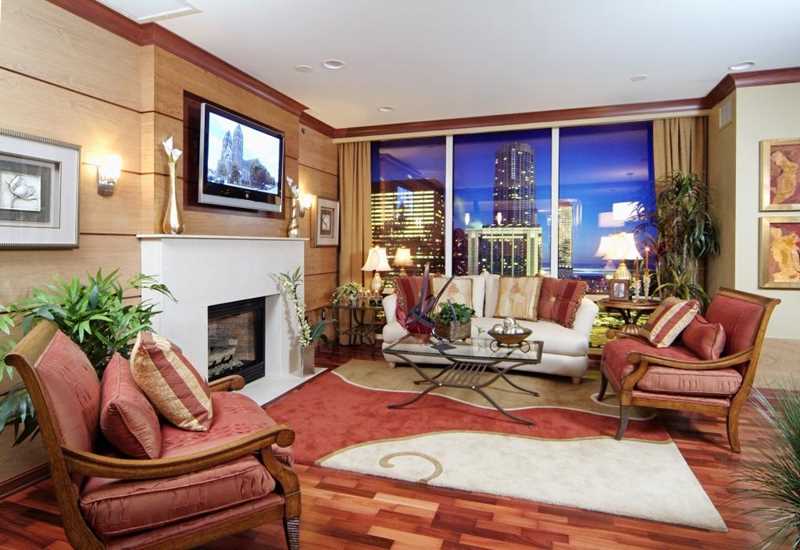 You might call Avenue East the condo building that could. The site, at 160 E Illinois St, in Streeterville, presented a set of unusual challenges, according to Arden Freeman of Built Form Architecture, the firm that designed the 26-story tower.

The half-acre footprint required building lot line to lot line, not uncommon in big-city development. However, Freeman says, that challenge was exacerbated by the InterContinental Chicago, the hotel that is virtually flush with Avenue East’s western wall. That required precision when digging the foundation, and it meant the new building had to be designed not to block the InterContinental’s east-facing windows.

The street presented the biggest hurdle: Illinois Street splits into upper and lower levels, so the building had to sit on the lower level while fitting snugly against the upper. “It’s like building up against a bridge,” Freeman says.

And the design had to respond to what Freeman calls “this urban canyon of limestone,” a stretch of Illinois Street lined by the Tribune Tower and the InterContinental. He chose concrete for the lower portion of Avenue East that faces Illinois, to lend some consistency to street-level views, he says. The upper portion of the building, and a long central section facing Saint Clair Street, are glass.

“We used everything from precast concrete panels to an aluminum panel rainscreen to terracotta, in order to acknowledge and blend in with the surrounding area,” he says. The building is now nearing completion, and the result is a striking change from the sagging mid-rise office building that formerly occupied the site.

The goal was to price the 133 condos competitively, according to says Ann Danner, president and owner of Residential Homes of America, Inc., the developer. “Avenue East was an exercise in economics when we first started, nearly three years ago,” she says. “We were looking to create beauty and affordability in this charming 26-story boutique building that takes up a prime location, but on a very difficult site.”

The location has much to recommend it, especially for those hoping to live close to Chicago’s popular tourist attractions. It’s steps from the Magnificent Mile shopping strip and less than a 10-minute walk to Water Tower Place, Navy Pier and Millennium Park.

The project was nearing a sellout in early September, with 15 of 133 condos available, according to Michael Hampton, sales director of the project for Equity Marketing Services, Inc., the exclusive sales agent.

“The location is so prime, the price points are extremely reasonable, and the quality of the building is impeccable,” says Hampton. “No small details were overlooked in the construction of Avenue East, and you may get some idea of this when I tell you that the developer reserved the best view in the house for all of the residents by locating 6,000 square feet of owners’ amenities on the top floor instead of selling it off as a penthouse.”

Some of those top-floor amenities include an owners’ clubroom with a catering kitchen, a fitness center, a surround-sound theater and a landscaped green roof.

The lobby is small, in keeping with the boutique nature of the building, and the décor aims for simplicity – nothing frilly or overdone – according to Freeman.

Parking occupies the first seven floors, with residences starting on the eighth level. A few eighth-floor units are still available, which Hampton says have extra-large terraces.

Freeman calls the condos “fairly transitional,” meaning they’re suited for both contemporary and traditional décor. “I like to say that they fit the Chicago condo criteria,” she says, “with the kitchens opening into the living areas, and the presence of some partial walls.”

Condos range from studios to three-bedrooms, with 772 to 2,593 square feet. Available units are scattered throughout the building, according to Hampton. Prices for the remaining units ranged in early September from the $290s to the $980s. Parking was priced from $50,000 to $55,000. All of the remaining units are ready for delivery, and closings began in early September.