Rogers Park condos continue their long slide along the bottom 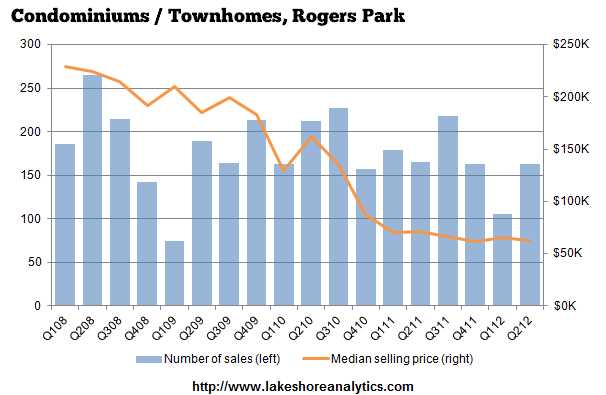 The bad news first: the median selling price of a condominium in Rogers Park last quarter was $62,500. But the good news is that they are selling at all.

163 condominiums or townhomes closed between April and June 2012, less than a 20% decline from the market average in 2008. The corresponding figure for the city as a whole is a 32% drop in volume — and that includes many neighborhoods that weren’t hit badly at all.

My own anecdotal observation over the last six months has been that it’s much easier for new buyers to get financing for condominiums in Chicago, especially in struggling buildings. As president of a homeowners’ association, I found that for most of 2010 and 2011, banks would not lend in buildings that were in any kind of distress (including high levels of foreclosure, delinquency, vacancy, or investment units). But things are starting to loosen up in the first half of 2012, with more new buyers approved and existing owners able to refinance.

In the long run, this should be good news for neighborhoods like Rogers Park, Irving Park, Albany Park, Humboldt Park, and others. It hurts to see the low selling prices now, but owners should be optimistic that units are selling.

Newer Post
Fountain Hills in Orland Park a golfer’s paradise
Older Post
Is $14,500 the right price for a 3-bedroom in Terror Town?