R+D659, the West Loop project with those Lichtenstein-lite billboards and goofy “Artie” videos, continues to rise at the corner of Randolph and Desplaines streets. Mesirow Financial Real Estate‘s 15-story condominium tower at 659 W Randolph St should top off the summer, and first deliveries will follow sometime in the fourth quarter of 2008, says @properties sales agent Chris McComas.

Despite a lag in sales during the final months of 2007, sales at R+D659 continue to rise steadily, McComas says. More than 130 of the building’s 237 homes are under contract, including the building’s largest penthouses (which will weigh in at more than 2,100 square feet) and all of its studio units. Remaining units have one to two bedrooms and one to two bathrooms, with prices from the $230s to the $420s. 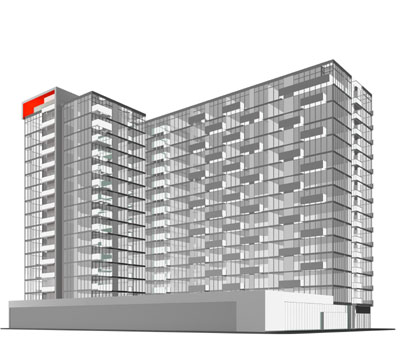 The development’s in-house lender, National City Mortgage, is still offering to reduce mortgage rates by 1.5 percent for primary home buyers. Since the deal does not apply to investors or to buyers who already have existing mortgages at higher amounts, most of the applicants seem to be first-time buyers, McComas says.

The mortgage plan in turn gives Mesirow the ability to sell its units at or near list price without doling out incentive after incentive, he says.

“People come from Emerald and say, ‘They’re giving away scooters and parking spaces. What are you going to give me?’ We’re in a position where we don’t have to give anything away or drop our prices, because our buyers are already coming out ahead, with cash in hand after every monthly payment,” he says.

R+D659, like most new condo projects, suffered a lull in the fourth quarter of 2007, but visits to the sales center have been brisk since January, and at least six buyers signed contracts in February alone, he says.

Newer Post
The Winchester revamps to larger layouts
Older Post
Ripped from the headlines: Transfer tax would extend to sellers under new proposal