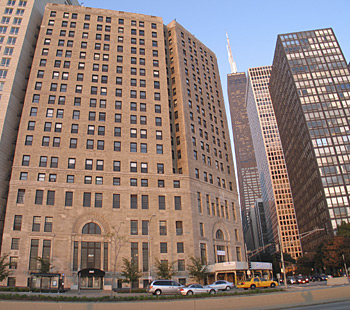 Remember the flap about the Lake Shore Athletic Club? Fifield Companies‘ proposal to tear it down and build luxury condos on the site sparked protests, including one last June in which preservationists dressed up like Olympic athletes. Now fans of the 1920s-era structure, designed by Jarvis Hunt, can breathe a sigh of relief. The Chicago Tribune is reporting that Northbrook-based Integrated Development Group LLC is in a deal to buy the building and convert it to upscale senior housing.

Lucien Lagrange, who was slated to design Fifield’s condo project, can’t be pleased. In a conversation with Yo back in July, he gave his views on the Lake Shore Athletic Club, located at 850 N Lake Shore Dr. He didn’t mince words:

“I think it’s the ugliest building on the street…it has small windows. It’s not elegant. The façade is not elegant. It looks like a prison. You drive by and say, ‘what’s going on in there?’

Booth Hansen Associates will oversee the renovation of the new senior building and reportedly won’t make any major changes to the facade. It appears as though the swimming pool won’t make it – too bad. Given some careful restoration, it might turn out almost as cool as the pool in the InterContinental Chicago.