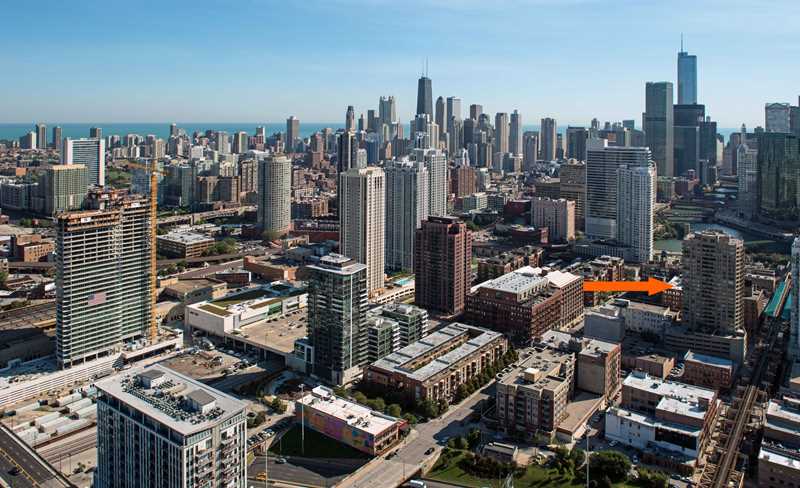 The Fulton River District was still a new neighborhood, but it had become relatively established by the time that Jefferson Tower, 200 N Jefferson, was begun in 2004 and completed early in 2006.

The 24-story condominium tower’s developers, concerned that the downtown Chicago market for 2-bedroom condos might be overbuilt, adapted their plans by converting two tiers of 2-bedrooms to 1-bedrooms. That increased the building’s unit count from the planned 176 to 198. Many of the building’s 1-bedroom layouts include a den and / or an extra half-bath.

The building had brisk pre-construction sales, offered incentives (including “free” parking spaces) as the market slowed, and had only six units available shortly after completion.

Prior to the crash of the for sale real estate market in the latter part of the last decade, the Fulton River District was home almost exclusively to new condos, townhomes and loft conversions. More recently the neighborhood has seen the addition of 1,000s of rental units in the high-rises at K Station.

How have Jefferson Tower’s original buyers fared in a sub-market that’s seen tremendous change? Based on a sampling of sales in the last year, not well.

The aerial photo, above, has the Fulton River District in the foreground, with an arrow pointing at Jefferson Tower. You can see 100s more of YoChicago’s aerial photographs at Flickr.