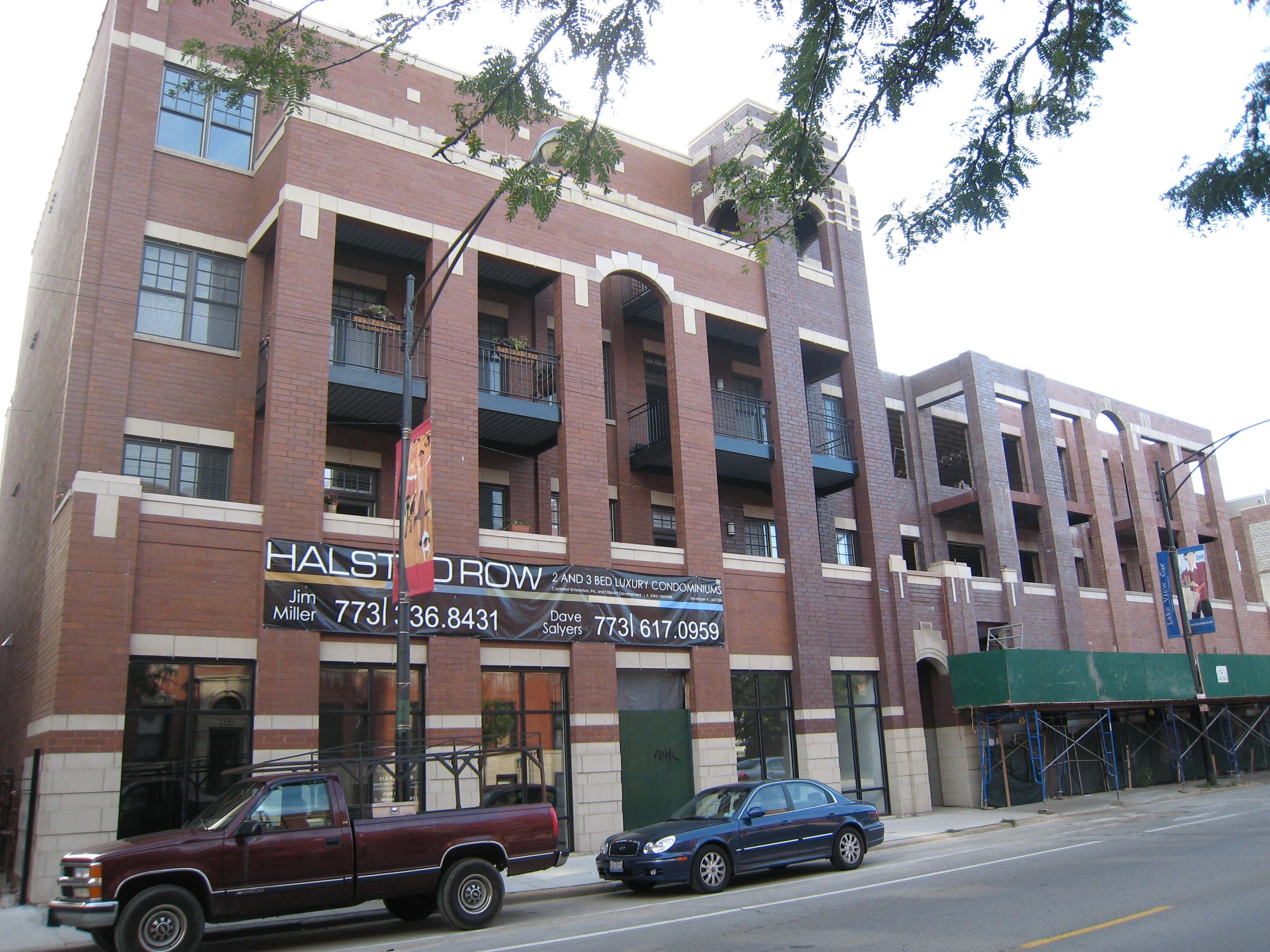 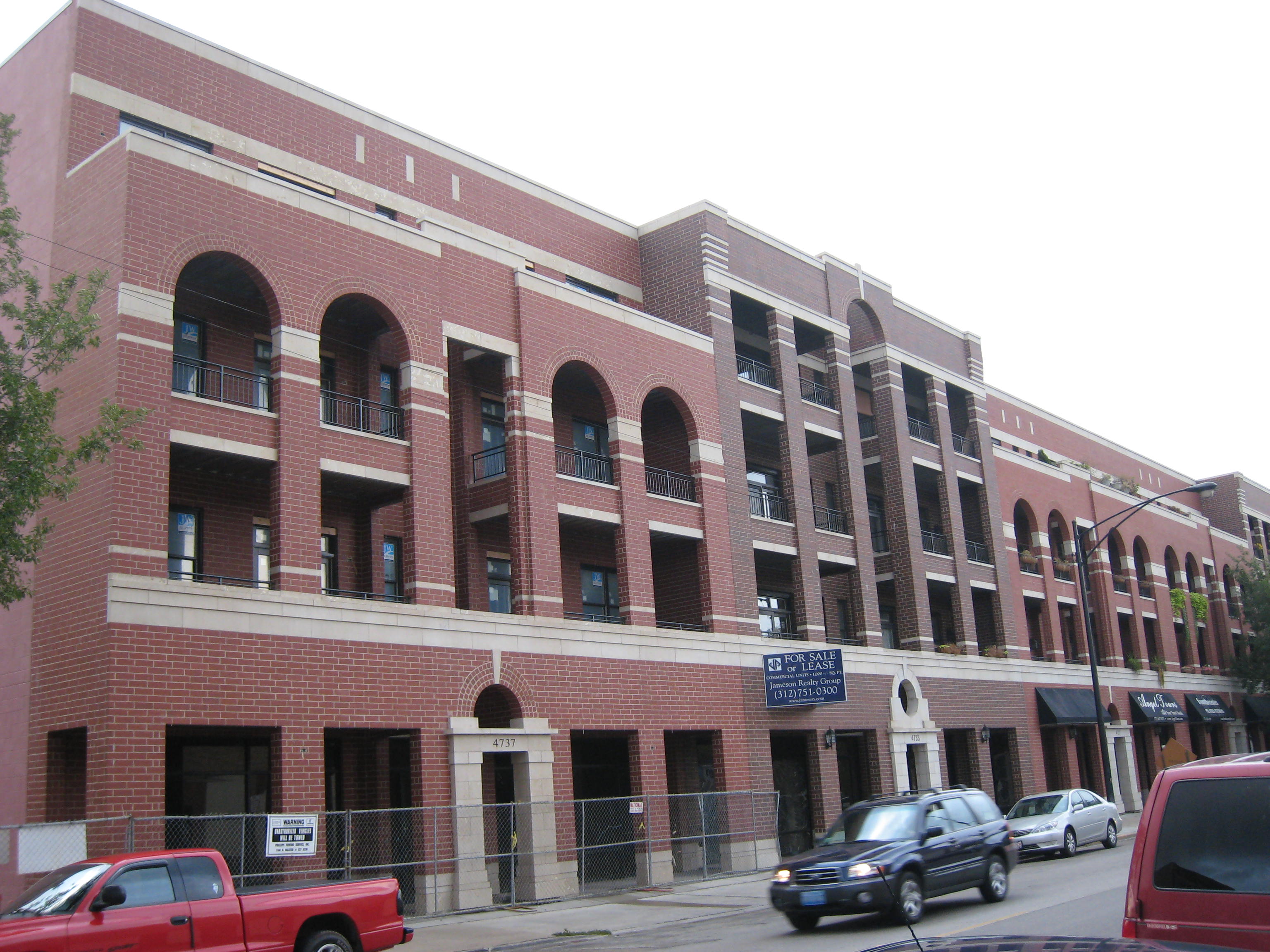 No, we didn’t accidentally post the same photo twice. If you look closely, you can see that these are different buildings – but you do have to look closely. At quick glance, Halsted Row (top) and Chase Park Commons (2nd photo above) are fairly interchangeable. There are the same two shades of brick, and the arches, limestone accents, ground-floor retail spaces, recessed balconies with wrought-iron rails and overall looks are pretty similar. Lincoln Row (below) varies the mold a little, but it too is substantially the same building on a smaller scale.

We’ll leave aside the question of architectural sameness – if you like the look of these buildings, you probably don’t mind the repetition, and if you don’t like the style, you can have three times the fun criticizing them.

The lists of finishes and amenities also are numbingly similar at these projects – oak floors, granite countertops, stainless steel appliances, gas fireplaces with stone surrounds, private balconies / terraces, one garage parking space included. The Halsted Row and Lincoln Row projects include Maytag washers and dryers, while Chase Park Commons has only the hookups. Condos at Halsted Row also include wine coolers (the appliance, not the beverage), and Chase Park is the only one with separate shower stalls in master baths.

Price and location are the real differentiators here. Halsted Row, the farthest southeast of the three, on the border of Lincoln Park and Lake View, has the highest price per square foot – in the low $390s as far as we can tell. As you’d expect, the price point heads south as you head west, and Lincoln Row seems to be averaging around $340 a square foot with a Lake View location about five blocks farther from the lake. The Ravenswood project (located on the east side of Clark, which means you could call this Uptown without being wrong) is averaging less than $275 a square foot.

If being close to good restaurants, trendy bars and boutiques is important to you, either of the Lake View projects wins hands-down over Chase Park Commons. If you’re looking for a different sort of setting, less dense and quieter, Chase Park Commons, facing the eponymous park and the stunning Our Lady of Lourdes church, across it, is the winner.

In terms of appreciation, Chase Park also might be a better bet than the more developed Lake View locations. The condo project is replacing a taxi barn that created a major blank spot on the street here, and it sits on the edge of a row of wholesalers that is ripe for redevelopment. The first movements in that direction already have begun.

Given the current market, this strip probably won’t be changing dramatically in the near future, but there’s no doubt that it will happen eventually. Buyers should not purchase here unless they like the neighborhood as is. But if that’s the case, they’ll probably like it a lot better in five to seven years.

Here’s a quick overview of each development:

Halsted Row is a development of five condo buildings at 2847 – 2905 N Halsted St by Castlebar Enterprises and Stillpoint Development. Available units have two or three bedrooms, two baths, and around 1,530 to 1,800 square feet, priced from the $590s to the $710s. Chicago Graystone Realty is marketing the homes.

Lincoln Row, also by Castlebar Enterprises and Stillpoint Development, is two condo buildings at 2921 and 2927 N Lincoln Ave. The units have two or three bedrooms, two baths, and around 1,600 to 1,700 square feet, priced from the $480s to the $650s. Chicago Graystone Realty is marketing the homes.

Chase Park Commons is a development of seven new six-flats at 4717 – 4737 N Clark St by Parkview 4721 N. Clark LLC. The buildings have three-bedroom two-bath units of more than 1,500 square feet, priced from the $380s to the $420s. Jameson Realty Group is marketing the homes. 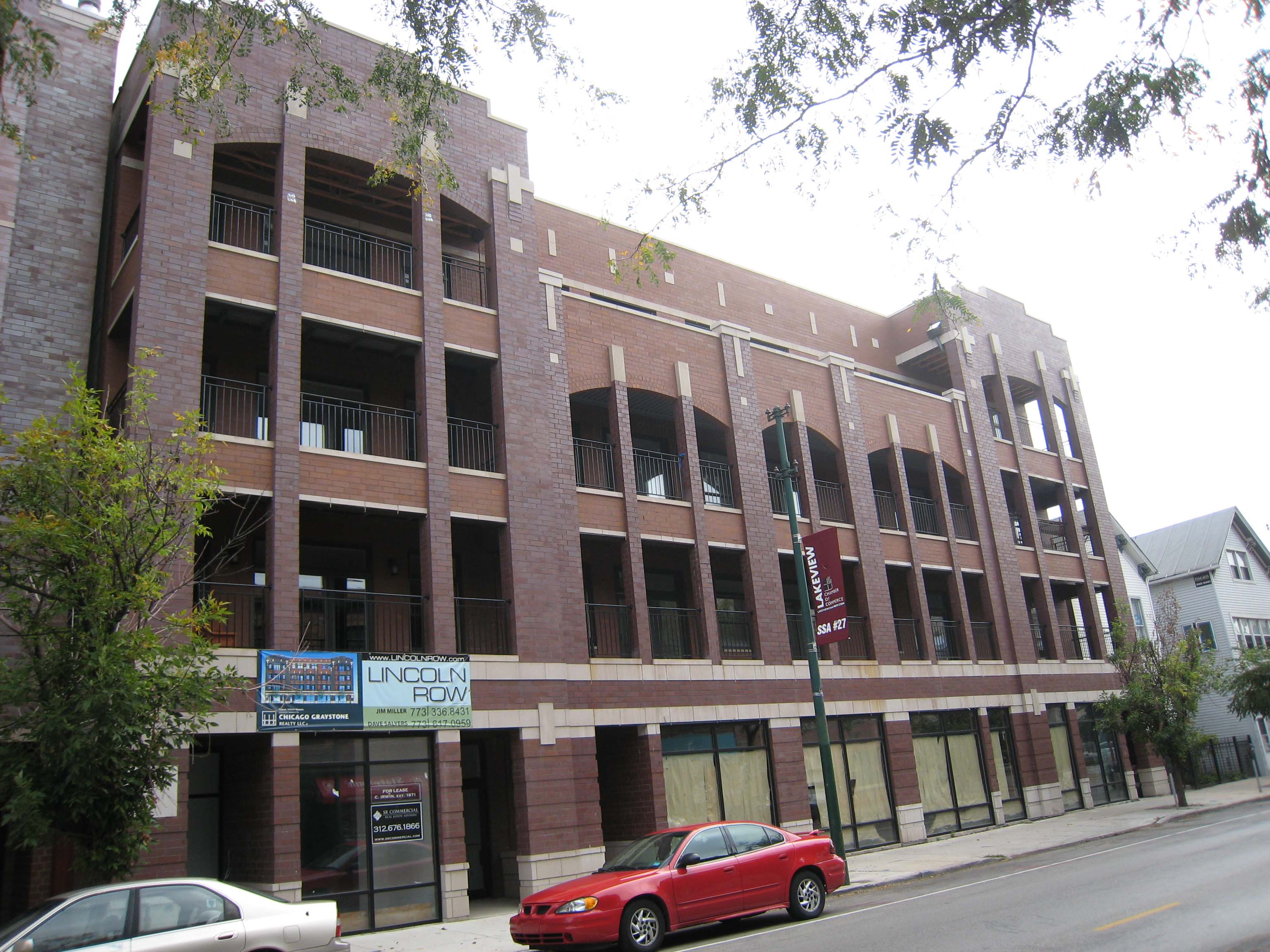