Shadow inventory down 28 percent from 2010 peak 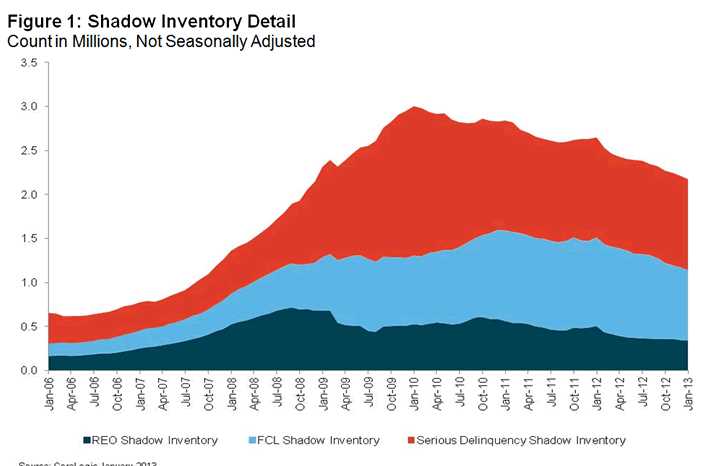 CoreLogic estimates the current stock of properties in the shadow inventory, also known as pending supply, by calculating the number of properties that are seriously delinquent, in foreclosure and held as real estate owned (REO) by mortgage servicers, but not currently listed on multiple listing services (MLSs). Transition rates of “delinquency to foreclosure” and “foreclosure to REO” are used to identify the currently distressed unlisted properties most likely to become REO properties. Properties that are not yet delinquent, but may become delinquent in the future, are not included in the estimate of the current shadow inventory. Shadow inventory is typically not included in the official reporting measurements of unsold inventory.

“The shadow inventory continued to drop at double the rate in January from prior-year levels. At this point in the recovery, we are seeing healthy reductions across much of the nation,” said Anand Nallathambi, president and CEO of CoreLogic. “As we move forward in 2013, we need to see more progress in Florida, New York, California, Illinois and New Jersey which now account for almost half of the country’s remaining shadow inventory.”

“The shadow inventory is declining steadily as properties are moving through the distressed pipeline,” said Dr. Mark Fleming, chief economist for CoreLogic. “States like Arizona, California and Colorado are experiencing significant declines year over year in the stock of serious delinquencies, a positive sign for further improvement in the shadow inventory.”

Data Highlights as of January 2013
As of January 2013, shadow inventory was at 2.2 million units, or nine months’ supply, and represented 85 percent of the 2.6 million properties currently seriously delinquent, in foreclosure or REO.

Over the twelve months ending January 2013, serious delinquencies, which are the main driver of the shadow inventory, declined the most in Arizona (40 percent), California (33 percent), Colorado (27 percent), Michigan (25 percent) and Wyoming (23 percent). 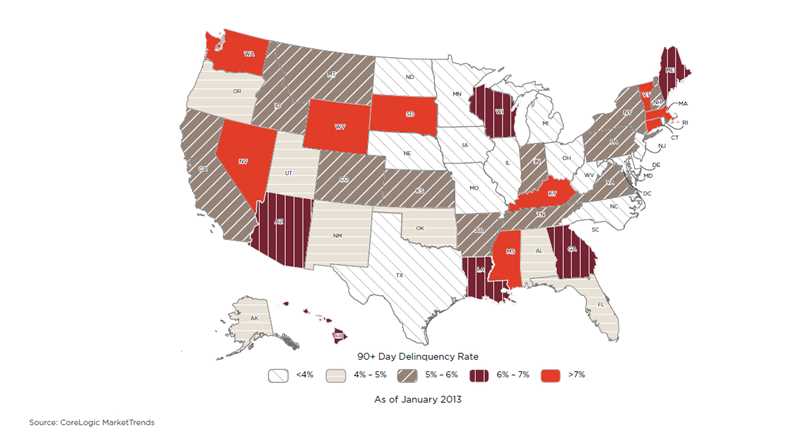