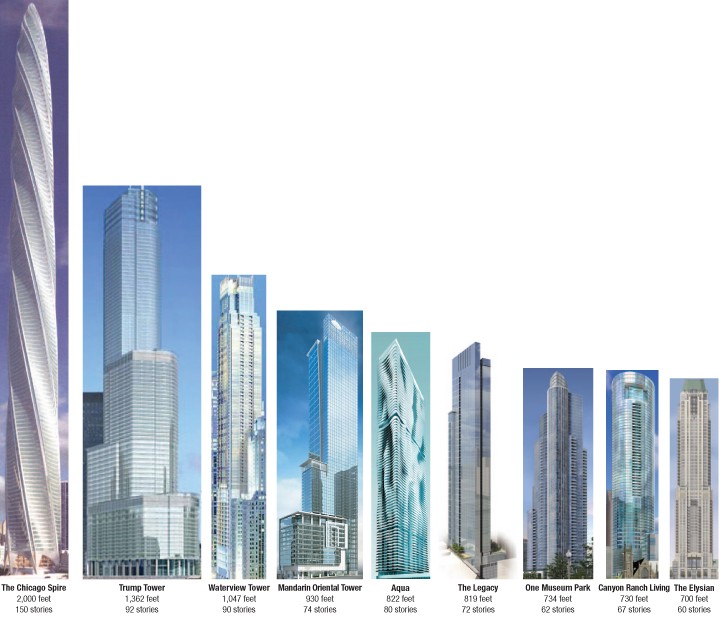 The Sears Tower, which for more than three decades was the tallest building in the world, stands 1,450 feet and, depending on how you count them, 108 stories tall. These are good facts to have tucked away as you try to appreciate the enormity of Shelbourne Development Ltd.’s proposed Chicago Spire. At 2,000 feet and 150 stories, the Santiago Calatrava-designed Spire would be 38 percent taller than the tower that for years was the undisputed giant of the world.

Take the Sears Tower and stack another 40-story high-rise on top of it, and you’re still not quite to the top of the twisting, corkscrew-like Spire, planned for 420 E. North Water St., in Streeterville.

Trump International Hotel & Tower will be just 88 feet shorter than The Sears Tower when it tops out at 92 floors, and across the Chicago River from Trump, Waterview Tower’s 90 stories put it just a few hundred feet under The Donald’s Chicago high-rise.

Building tall is in vogue for Chicago’s residential developers like never before. That’s despite predictions that fears of terrorism would spawn shorter, less attention-getting structures after Sept. 11, 2001.

“In Asia we will still see very tall buildings,” A. Eugene Kohn, of the New York architecture firm Kohn Pedersen Fox, wrote in the online journal of the Wharton School of The University of Pennsylvania in 2001. “But in this country I would venture a good guess there will be no proposals for super-tall buildings in the near future.”

Such fears have dissipated as time has passed and as government alerts have jumped from yellow to red to orange and back again. Terrorist attacks now seem as likely to arrive through a shipping port or a mailbox as in an airplane aimed at a high-rise.

Fears of terrorism did not deter the more than 600 homebuyers who have purchased at Trump, and they did not deter Shelbourne’s Garrett Kelleher from touting The Spire as a world-class, iconic building that he hopes will draw buyers from overseas as well as the U.S.

Why has residential building reached such heights downtown? A decade-long real estate boom and the growth of residential neighborhoods in the city center have literally sent land costs through the roof. The taller builders go, the more buyers they have to share land and construction costs – and the more profit they can make from a single site, at least in theory.

Taller towers also have better views, generally, which after all, is one of the main reasons buyers who can afford mansions on the ground are instead paying millions for condos in the sky. High-rises like Trump and Waterview Tower will have some of the city’s best vistas – sightlines straight down the river, the skyline at arm’s reach. Others, like the 74-story Mandarin Oriental Tower, 230 N. Stetson Ave., and the 67-story Canyon Ranch Living – Chicago, 680 N. Rush St., will rise above neighboring high-rises in their developed city locations to gain great downtown views.

Farther south, The Enterprise Companies has followed the trend of ever-taller towers at its Museum Park community in the South Loop’s Central Station development as the neighborhood has filled in. The early Museum Park towers were comparative shorties, but the latest, a two-tower development called One Museum Park, is the highest in the South Loop and among the highest in the city. The buildings’ height allows Enterprise to boost services and amenities by sharing them among more buyers, and it lures buyers who can afford more established locations to the breathtaking lake views these towers will have.

“One Museum Park offers the only ultra-luxury buildings in the South Loop; we’re able to command that price point because of those views,” says Ron Shipka Jr., a principal in The Enterprise Companies. “You move into high-rise buildings really for two reasons, view and location…I think you can get away with a non-view building on the North Side, if positioned correctly and located in a good area. But as it relates to stuff south, you have to have a view.”

Having an image doesn’t hurt either, at this price point, and the tallest towers loom as large in buyers’ consciousness as they will on the skyline. At Trump, the 92-story height is complemented by the developer’s brand, and at The Spire, the cachet of starchitect Calatrava and his innovative design, provide major stature.

Four of the five tallest condo towers rising in Chicago include hotels (the only one that doesn’t, The Spire, scrapped plans for a hotel component when the project was reconfigured). Hotels enhance a building’s image – and on a very concrete level, buyers’ lifestyles. Residents at most of the tallest developments underway will have access to gourmet room service, maid service, spas, restaurants and endless other perks.

Whatever doubts 9 / 11 spurred, tall buildings are back. That the new crop of super-tall towers is devoted to hotel and residential uses, and not primarily office space, like the Sears Tower and the John Hancock Center, seems to demonstrate an even greater level of trust. The new giants don’t just require their occupants to work in the sky, but also to sleep there. How peacefully they sleep these days might have more to do with the sagging real estate market than the fear of terrorism.

The ten tallest residential towers proposed or underway in Chicago

Whole prices, which have been rounded, were quoted in October 2007 and may have changed since then.
The heights of high-rise developments often change before, and even after, ground has been broken as builders respond to buyer demands, the realities of the marketplace, financing and other factors.