Some tips for renters, and an Arnell Cordero update 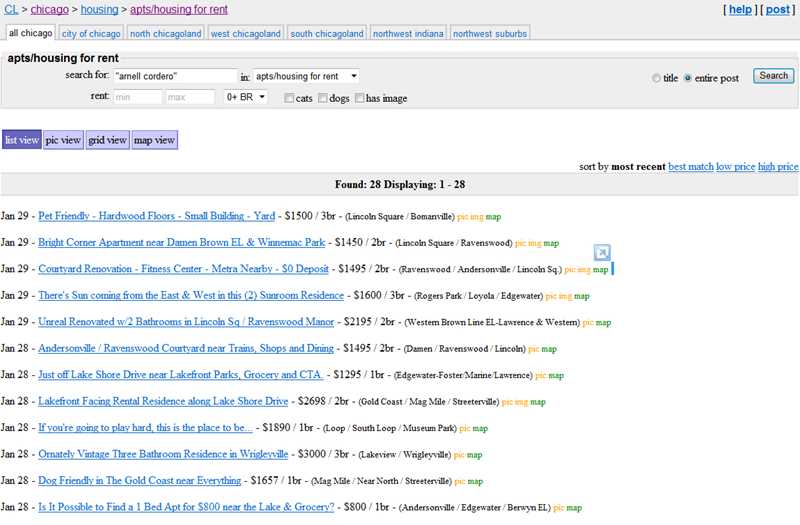 Six weeks ago, prompted by a tipster, we reported that one Arnell Cordero was advertising rental finding services without being properly licensed. Cordero’s Craigslist ads linked to Blue City Chicago Apartments, a brokerage firm whose license was shown in the IDFPR database as expired.

I called Cordero on December 30 to inquire about his status. He informed me that he’d successfully completed his broker licensing classes, was working legally on a 45-day sponsor card, and that “everything has been mailed in” for his broker’s license.

Blue City Chicago Apartments has renewed its corporate broker license, but there’s still no sign of Arnell Cordero in the IDFPR database. Mail delays? Backed-up data entry at the IDFPR? Or? Whatever the case may be, Cordero currently running ads on Craigslist that require a license. And some of those ads are for properties that don’t allow brokers to advertise them.

ADDED 1/30 10:25 a.m. As of this morning, the IDFPR database reflects that Cordero was issued a broker license yesterday.

There are widespread abuses of state licensing laws in the Chicago rental services industry, and too many rental services will employ anyone who can fog a mirror. Any renter who’s considering working with a rental service should insist on pairing up only with a fully-licensed, experienced agent.

Here’s what to look for. Don’t work with a rookie on a 120-day permit – he or she should gain experience at their own expense or their company’s, not on your dime. It takes so little time, effort and money to get a Leasing Agent license that you should be deeply suspicious of anyone who doesn’t have at least that minimum qualification.

Don’t work with a rental services agent who shows you a “sponsor card,” unless you can verify that the individual has previously been licensed and is merely changing companies. Companies have been known to issue sponsor cards fraudulently.

Don’t just walk into a rental service office and work with whoever’s next in the cattle-call rotation. Insist on working with a licensed agent who has at least two years’ experience. You don’t have to take potluck. You are likely to be paying a month’s rent, indirectly, when you use a rental service, and you should treat the process as seriously as you would when purchasing anything that cost the equivalent of a month’s rent.

If you appreciate the light we’re shining on Chicago’s rental services, like our Craigslist Apartment Cleanup page at Facebook to show your support.