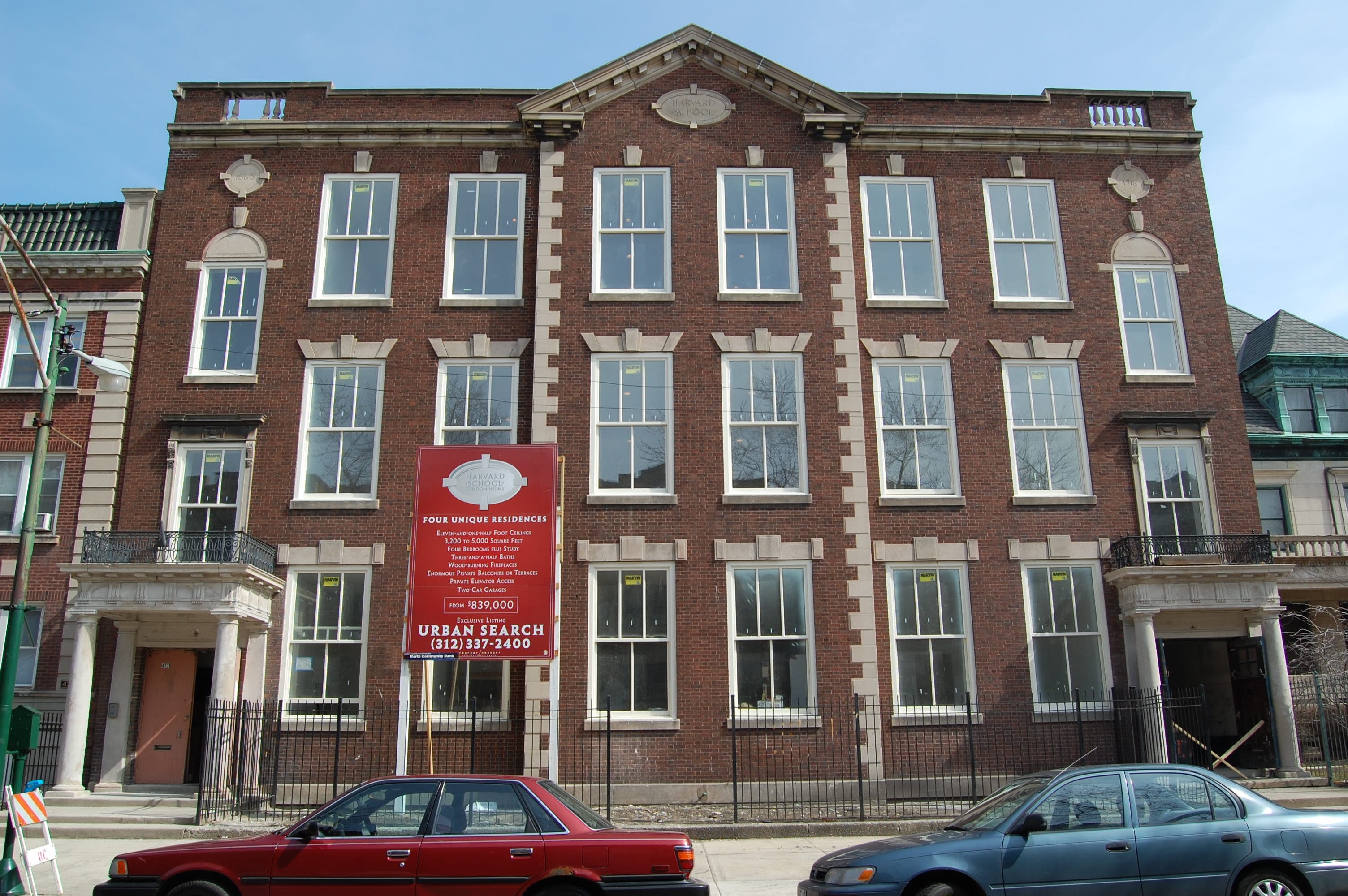 When planning the conversion of the Harvard School for Boys in the South Side’s Kenwood neighborhood, developer Steve Soble pored over old yearbooks to retain period touches. Few finishes from the dilapidated 1917 building were salvageable, so Soble hung onto parts of the original terrazzo floors and the oak doors, which are nearly three inches thick and include wire-glass windows.
The Harvard School’s history is notable for more than its architecture; it played a bit part in the 1924 murder of 14-year-old Bobby Franks, who was walking home from the school, at 4731 S. Ellis Ave., when Richard Leopold and Nathan Loeb, a pair of brilliant students at the University of Chicago, nabbed and murdered him. They were later convicted of “the crime of the century.”

“We’re not emphasizing that,” Robert Sullivan, of real estate brokerage Urban Search, says with a laugh. Urban Search is marketing the building’s residential conversion as the Harvard School Condominiums, slated for a grand opening on April 15.

He noted some of the school’s other famous graduates: Edgar Rice Burroughs, creator of Tarzan; Mandy Patinkin, Broadway and television star; and William Shawn, perhaps the best-known editor of the New Yorker magazine.

Soble is used to living with history and will do so quite literally on this project. With the help of his partner on the development, Duncan Harris, principal in Kimwood, LLC, Soble plans to convert the former Harvard School gym into a private residence for himself. His restaurant and real estate company, Spare Time, Inc., has a strong preservationist bent; projects include The North Avenue Bath House and Southport Lanes, which bills itself as one of the only bowling alleys in the country where pins are still replaced by hand.

Aside from the gym, the Harvard School Condominiums will have four units, each with four bedrooms and 3.5 bathrooms. Three condos will be housed within the school building, with one unit on each floor. A fourth condo will occupy two stories in an adjacent portion of the building, across a courtyard.

Three units have studies and one has a family room. They range from 3,026 to 4,868 square feet, with 11.5-foot ceiling heights, woodburning fireplaces and oak floors throughout. Kitchen appliances are by Sub-Zero, Thermador and Bosch. Bathrooms have Kohler tubs and toilets. In a nod to a popular style of the early 20th century, floors in the second and third bathrooms will have hexagonal white-and-black ceramic tile by Daltile.

All of the units are available, and prices, which include two garage spaces per unit, range from the $830s to the $940s.