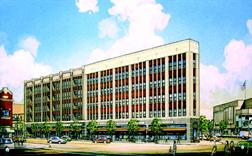 We haven’t posted anything about Klee Plaza at Six Corners, located at 4015 N Milwaukee Ave, since former Yo writer Patrick Rollens visited the loft development back in February. Although he’s eager to sell his 20 remaining units, developer Marc Sussman says he isn’t planning to lower prices anytime soon.

“We have special financing available for first-time buyers and income-qualified buyers, and we’re offering either closing cost incentives or other help,” Sussman says. “Because we’re a city project, we have access to a few different things,” he says, citing a city mortgage program that offers four-percent gifts to first-time buyers and a state-wide program that provides $13,000 grants to qualified buyers.

The development is located in Portage Park, on the border of Old Irving Park, and from the six-corner intersection there are three bus lines, and the nearest Metra and Blue Line stations are about a mile away. Sussman says about 55 percent of the retail in the building has been leased, and tenants include a Vitamin Shoppe, Cricket Communications, and a Pearle Vision store.

The video Patrick made with Sussman at Klee Plaza last February is below.