Earlier today I visited the intersection of Barry and Spaulding in Avondale for a look around, with a focus on a few recent real estate sales.

What prompted my visit was a Chicago Sun-Times story today identifying the intersection as “Ground Zero in the Chicago Police Department’s all-out war on the Maniac Latin Disciples.”

Let’s clarify the BS reference at the outset, by quoting from the Sun-Times story:

The intersection looks like countless others on the Northwest Side.

But there’s also a street sign spray-painted with a blue pitchfork — the symbol of the Maniac Latin Disciples.

It’s Barry and Spaulding. “B.S.” for short. The gang members who call it their turf, however, have a new name for the neighborhood surrounding B.S.

“It’s like the Bermuda Triangle,” one high-ranking gang member told the Chicago Sun-Times. “As long as you fly around it, you’re OK. But the minute you drive in there, you get sucked in [by the police.]” 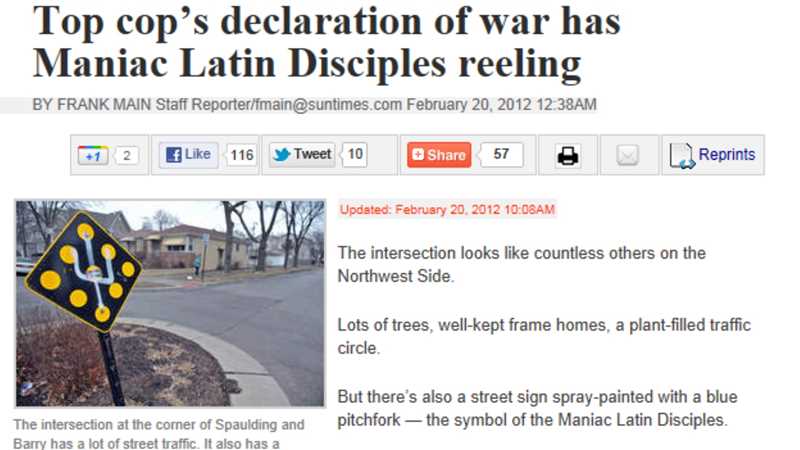 The incredibly neatly spray-painted sign shown in the screen cap of the Sun-Times story was gone by the time of my visit. 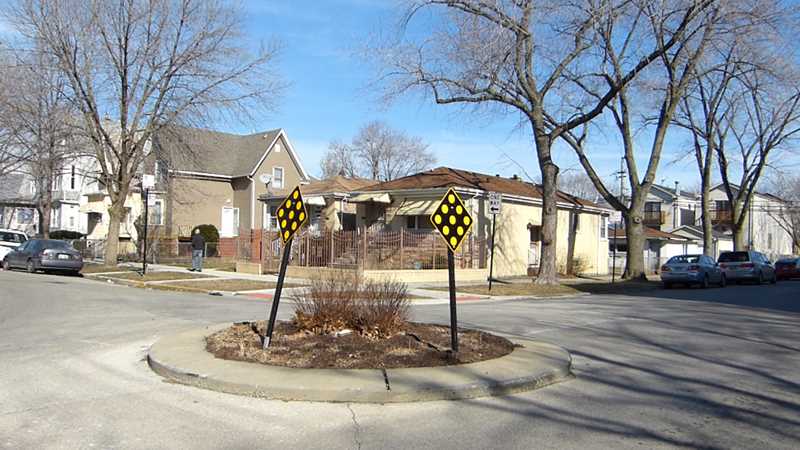 The scene I saw at Barry and Spaulding was calm, clean and orderly. A homeowner in his mid-30s who’s lived a half a block from the intersection for 6 years, a man in his 50s who frequently walks the street, and a young lady who lives nearby all reported having seen no signs of gang activity at the intersection. It’s possible for some residents, of course, to be oblivious to their surroundings.

I saw no gang graffiti on nearby streets or in the alleys, and no signs of gang activity on my hour-long visit to the area. One indirect sign of gang activity was a very active police presence: there wasn’t more than a 5-minute interval without seeing a police vehicle, marked or plain.

Several properties on Spaulding have sold at substantial discounts from their prices levels five years ago, but there’s nothing remarkable about that. A rehabbed 4-bedroom, 3-bath single-family at 3122 N Spaulding sold last year for $385,000. A post on the listing and another on the sale at CribChatter elicited generally favorable comments about the location.

Today’s Sun-Times story, in many respects, simply repeats information from reports on MSNBC’s The Squeeze. You can see a six-part video on the Maniac Latin Disciples from The Squeeze at YouTube: One, Two, Three, Four, Five, Six.