Streeterville and the Gold Coast may have a corner on the high-profile luxury tower market, and the South Loop and West Loop may be home to the trendiest new condo projects, but when it comes to large-scale projects with a variety of home types and sizes, few areas of Chicago have seen as much activity in recent years as the South Side.

In old neighborhoods like Bronzeville, Bridgeport, North Kenwood-Oakland and beyond, new townhouses, single-family homes and condominium buildings are springing up, covering whole city blocks with the promise of revitalization. Many are participants in the Plan for Transformation, the Chicago Housing Authority‘s “blueprint for positive change” that promises to replace the city’s old public housing system.

Although most Plan for Transformation projects are known for their public housing units and affordable homes, many also have strong market-rate components that are attracting buyers who have traditionally looked for homes in areas to the north. The allure of these market-rate homes could help these developments become true mixed-income developments with a level of diversity found nowhere else within Chicago.

The six developments listed below are some of the largest currently underway on the South Side, but they by no means represent the area’s only new residential construction projects. For a comprehensive list of new homes on the South Side, visit NewHomeNotebook.com. Eastgate Village
The South Loop’s development boom has spread to nearby neighborhoods in recent years, including the northern portion of Bronzeville. One of the area’s most prolific new residential developments is Eastgate Village, a new community developed by New West Realty and Mercy Developers on a 10-acre site formerly owned by Mercy Hospital. Eastgate Village straddles the border of the South Loop and Bronzeville, sitting just to the south of the Stevenson Expressway, within shouting distance of McCormick Place and the proposed Olympic Village. 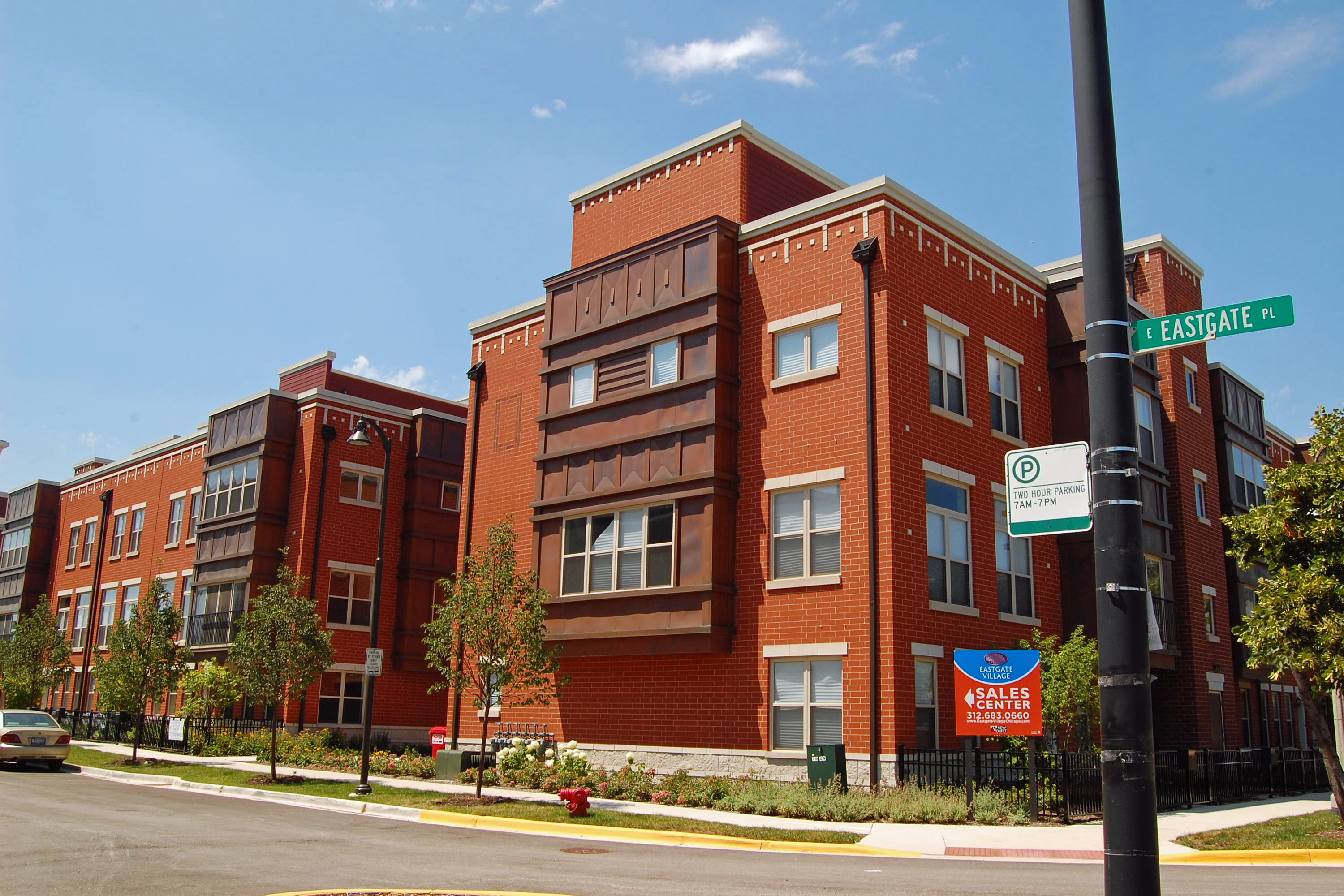 According to Katherine Sather, New West Realty’s director of marketing, the second of Eastgate Village’s four phases is currently under construction. Sather says that Phase II will consist of about 80 condos divided among four buildings. Prices will run from the $280s to the $390s, and deliveries are expected for the fall.

A handful of townhouses are still left from Phase I, but all of its condos are sold out, Sather says. She expects that when completed, the entire development will include more than 300 units – both condos and townhouses.

Park Boulevard
Residents of Bridgeport and western Bronzeville don’t need a scoreboard to know how their White Sox are doing. They just look (and listen) for the fireworks above U.S. Cellular Field. Few new developments on the South Side have the view that Park Boulevard has: The only thing that sits between the ballpark and Stateway Associates’ massive mixed-income project is the Dan Ryan Expressway, meaning home owners at Park Boulevard will have a front-row seat to the White Sox’s festivities. Almost 150 of the 211 condos, townhouses and single-family homes planned for Park Boulevard’s first phase are already occupied or ready for delivery, says sales manager Norma Baskin. The homes range in price from the $140s for a one-bedroom condo to the $500s for a four-bedroom/3.5-bath single-family home with a two-car garage.

Each Park Boulevard home has hardwood floors in its foyer, living room and kitchen. Its kitchens are decked out with GE stainless-steel appliances, Moen fixtures, granite countertops and maple cabinetry, and every bathroom has ceramic tile floors and shower surrounds, marble vanity tops and walk-in showers with glass doors.

Starbucks Coffee, Jimmy John’s, National City Bank and FedEx Kinko’s have already moved into retail spaces at Park Boulevard, Baskin says. With a second phase of homes on the horizon, even more businesses should arrive to fill Park Boulevard’s storefronts. A new community is starting to emerge on Chicago’s Near South Side. In the area roughly bounded by 37th Street on the north, Oakwood Boulevard on south, Langley Avenue on the east, and Cottage Grove Avenue on the West, Oakwood Shores has emerged as one of Chicago’s largest mixed-income developments.

Granite Partners for Oakwood Boulevard is building more than 3,000 homes on about 90 acres of land owned by the Chicago Housing Authority, including the former sites of the Madden Park, Ida B Wells and Darrow Homes. Almost half of those homes will be market-rate condominiums and townhouses. Most of the buildings are two- and three-story walk-ups that reflect the surrounding neighborhoods, but the architecture is varied.

“When you’re talking about starting a neighborhood, what you need is a lot of variety and density,” says Granite Partners president Joseph Williams. That’s why plans are in place at Oakwood Shores to fill 80,000 square feet of retail space further north on Cottage Grove Avenue.

One of Oakwood Shores’ highest-profile buildings is Grove Place, an 83-unit, seven-story mid-rise at the corner of 37th Street and Cottage Grove Avenue that will be completed by the end of 2009. Grove Place will feature one- to three-bedroom residences at price points ranging from the $190s for a one-bedroom to the $360s for a three-bedroom condo with two baths.

Lake Park Crescent
Among North Kenwood-Oakland’s graystones and high-rises, another new lakeside neighborhood is taking shape. There, in the area bounded by Lake Park and Oakenwald avenues and 40th and 42nd streets, a collection of new market-rate and affordable homes are nearing completion. The first phase of construction at Lake Park Crescent is wrapping this month, as crews put the finishing touches on the development’s market-rate six-flats, says sales associate Robbi Davis.

Buyers started moving into homes at Draper and Kramer’s large mixed-use development this spring, Davis said, but plenty of homes are still available. Lake Park Crescent’s “CityHomes” – condos ranging from one-bedroom, single-floor units to three-bedroom duplexes – start in the $190s. Several two-bedroom/2.5-bath duplexes in the development’s six-flats are also available for the $520s and higher. Single-family townhouses start in the $690s.

Lake Park Crescent’s unsold homes are already built out, meaning that buyers don’t have much control over the units’ finishes. That shouldn’t be a problem, Davis says, because Draper and Kramer built every home “fully loaded” with things like granite countertops and stainless-steel appliances.

As an incentive for buying at Lake Park Crescent, Draper and Kramer will take $10,000 to $20,000 off of closing costs, depending on the type of home purchased. Sales director Rosemary Malizia says that McKinley Park Lofts is one of the area’s first full-amenity buildings. With an in-building fitness center, a gated and landscaped parking lot and a furnished lobby, the development is a significant break from the six-flats and walk-ups that are traditionally found in McKinley Park. The adaptive reuse project involved rehabbing an existing warehouse and converting it into a residential loft and adding three more new-construction stories.

“The original structure is a concrete building – it’s not a timber loft,” Malizia says. “It’s solid, and it’s not as dusty as some timber lofts.”

In addition to building amenities, Malizia points to location as one of McKinley Park Lofts’ most attractive features. The development is situated across the street from the neighborhood’s eponymous park, and it’s a short walk from the nearest CTA Orange Line station. The Stevenson Expressway is also located just a block to the west.

Sales have progressed steadily since The Habitat Company first introduced McKinley Park Lofts to the market in 2006. As of July, 117 of the 163 units had sold. Price points for the available one- to three-bedroom units are from the $170s to the $330s.

“People like that it’s a large community,” Taylor-Brookins says of the project, a mix of 123 single-family homes and 50 townhouses bounded by Vincennes Avenue and 105th, 107th and Throop streets. “It’s a whole new development in one place, instead of infill homes here and there, which is what people are used to seeing in this area.”

The development – a joint project between MGM Urban Properties and The Terrell Group – may be in far-flung Washington Heights, but buyers will have easy access to the rest of the city and metro area via a nearby Metra station and I-57. And in an attempt to further sweeten the pot, MGM and Terrell are offering two incentives to qualified buyers.

Buyers who finance their homes through National City Bank will see their mortgage rates reduced by 1.5 percentage points, Taylor-Brookins says. Government employees at any level – city, county, state or federal – will also receive $5,000 toward upgrades, she says.

Prices at Renaissance at Beverly Ridge start in the $270s for a three-bedroom/2.5-bath townhouse and reach into the $560s for a 3,165 square-foot, three-bedroom home. Every home has features like granite, stainless-steel kitchen appliances, 9-foot ceiling heights and two-car attached garages.

Developers will start seeding Renaissance at Beverly Ridge’s new park this fall in order to have the green space ready for the spring of 2009. The park, which measures one square block, will have a walking path, benches and professional landscaping, says Taylor-Brookins.