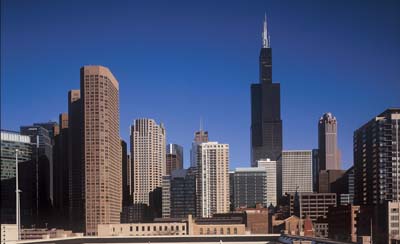 Twelve stories might not seem so tall given the vertical building boom underway downtown, but for the West Loop, it’s nose-bleed development. Emerald, a new Property Consultants project that comprises two mirror 12-story high-rises (notice we didn’t say “twin towers”), will be only the second residential high-rise development to be built in the heart of the West Loop — west of the expressway and south of Lake St.

The West Loop Community Organization has generally opposed high-rise development in the West Loop, afraid that high-rises would ruin the character of a neighborhood built on vintage industrial mid-rises converted to condo and office lofts. Skybridge, the 39-story tower at 1 N Halsted St, was a notable exception. In that case, the group was won over by a spectacular Ralph Johnson design with various erosions (see-through in some places) that break up the scale and by the fact that the tower takes up a fraction of its site, on the expressway and at the very edge of the most residential part of the neighborhood.

The 212-unit Emerald, planned for 101 S Green St, can’t claim to be on the edge, though at 12 stories, the buildings aren’t exactly giants. Still, 12 stories in the West Loop will tower over most surrounding buildings in a neighborhood with some of the most stunning skyline views in Chicago.

Developer Bill Senne, of Property Consultants, had a couple of things going for him in pitching the development. He moved into Promenade, his condo project at Racine and Adams, to become a West Loop resident, and he’s married to the former executive director of the community organization that’s a watchdog for new neighborhood development, Leslie Senne (formerly Cully). Back when she was executive director of the “West Loop Gate” organization, as it was known in the ’90s, Cully opposed highrise development in the neighborhood and didn’t want anything built higher than six or seven stories.

She was the voice of an organization then and not necessarily speaking her mind, and a lot can change in 10 years. One thing that’s changed has been the proliferation of endless and interchangeable red brick condo mid-rises in the neighborhood. If the Emerald design is right — it’s hard to say at this point, since the tentative design has changed — we’d rather see something fresh and a little tall than another uninspired condo building in a neighborhood that has some of the most inspired loft designs in the city.