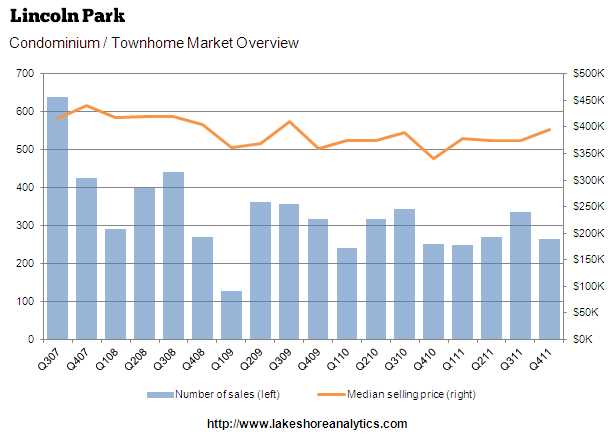 Compiling market statistics in Chicago neighborhoods has usually meant looking at a lot of jagged (and mostly downward-pointing) lines over the last few years. But in two cases, the lines have been pretty straight.

The neighborhoods of West Town and Lincoln Park have had very stable condominium prices. In Lincoln Park, the quarterly median selling price of condominiums and townhomes has not changed by more than 13% either way in any of the last 16 quarters and it has not changed in the same direction for more than two quarters in a row. It ended 2011 at $395,000, just 4% below where it was in the middle of 2007. 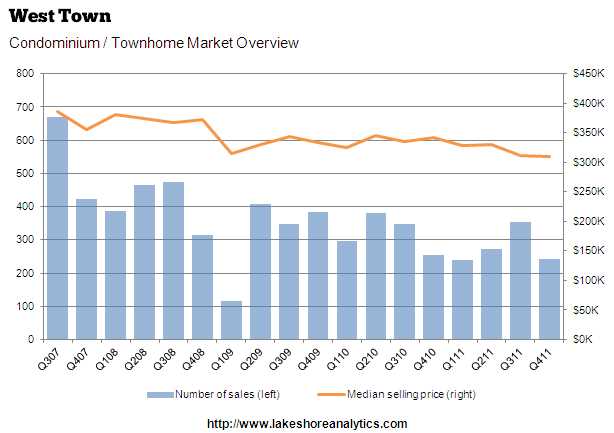 Things have been similar in West Town, which includes Wicker Park. The median selling price of condominiums and townhomes changed by 15% once (in the first quarter of 2009), but didn’t change by more than 7% either way in any other quarter in the last four years. The average quarterly change was just 4% one way or the other, and the change was never in the same direction more than twice consecutively. West Town ended 2011 at $310,000, just 12% below its level in mid-2007.

Surprisingly, the same does not hold true for detached houses in these neighborhoods. In West Town, the average change from quarter to quarter was 15% in either direction; in Lincoln Park, it was 13%.

If you page through charts showing the median prices of condominiums and houses in Chicago neighborhoods, you’ll see these are two of the only straight lines around. You can sign up to receive these charts each quarter.