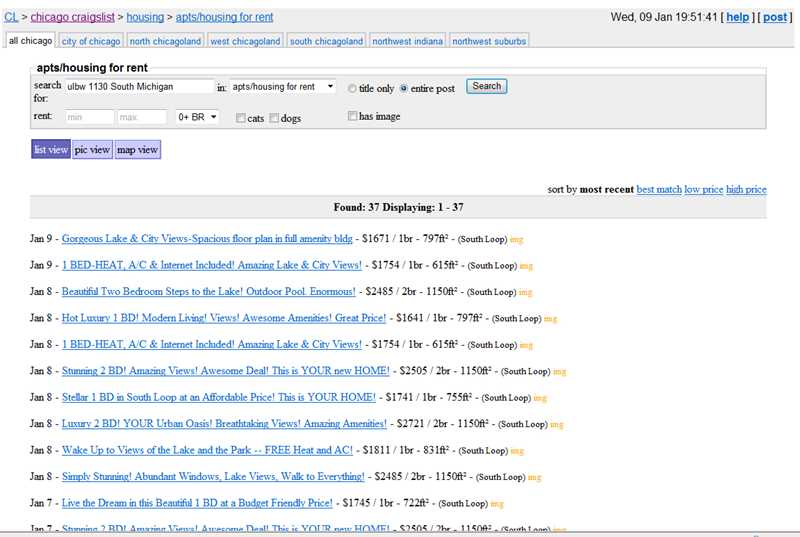 We recently selected Urban Lux as the second entry on our roster of Craigslist’s dirtiest dozen advertisers.

As of early yesterday evening a search at Craigslist returned 1,370 Urban Lux ads for 61 separate apartment buildings. The number of Urban Lux ads for each property varied widely – from 5 for Park Michigan (one of our clients), to 72 for Presidential Towers and 75 for One East Delaware, which listed only 12 units available for rent at its website.

Except for one building in Uptown and one in Rogers Park, all of the buildings in Urban Lux’s ads – and more – can be found on YoChicago’s at-a-glance apartment lists and maps. YoChicago’s lists include maps, video where available, and links to the building websites for up-to-date, accurate information. 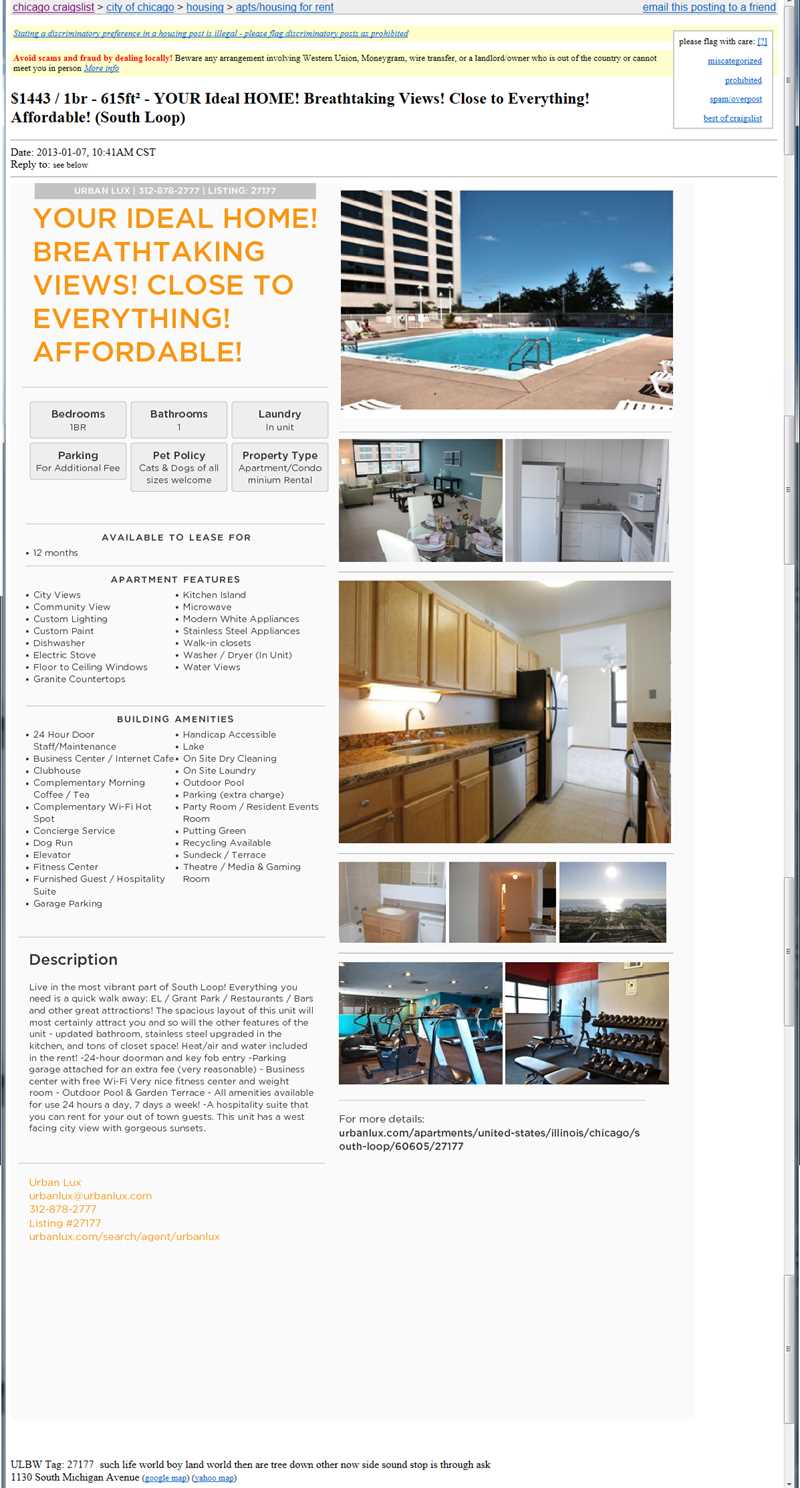 Up-to-date, accurate information is not something you should expect from Urban Lux’s Craigslist ads, or from the building information on its website. What you can expect is what I found – representations that sought-after features exist at buildings where they don’t. The ad pictured for 1130 South Michigan, for example, states that the apartment features floor-to-ceiling windows. It doesn’t. The ad tells you that the unit “has a west facing city view with gorgeous sunsets” – and pictures a lake view. The ad states the square footage as 615, and the building website illustrates west-facing units ranging in size from 760 to 843 square feet and renting for substantially more than the advertised amount. The building does have in-unit washer / dryers in selected units but it doesn’t have any 615 square foot units, so it’s not possible to determine whether this unit has that feature. Other Urban Lux ads for 1130 South Michigan mention gas ranges and private balconies. Good luck in finding those features in the advertised units.

Urban Lux consistently appears to pull its rental amounts out of thin air. I say that will a full awareness of just how rapidly rent amounts and availabilities change in today’s market. As an example, here’s how a high-rise leasing manager responded to my sending a link to an Urban Lux ad for a “1-bedroom apartment” for $1,700 in a building where the lowest-priced 1-bedroom listed at the building website was $400 higher at the time of the ad:

The convertible (not even a one bedroom) that is pictured in that craigslist ad hasn’t been available for the past 4 months. We rented every single one by June. It’s astounding these firms still do things like this for traffic. It doesn’t even have the correct information on it at all. We don’t even have a convertible on notice or vacant right now besides our largest at $1,930 per month. 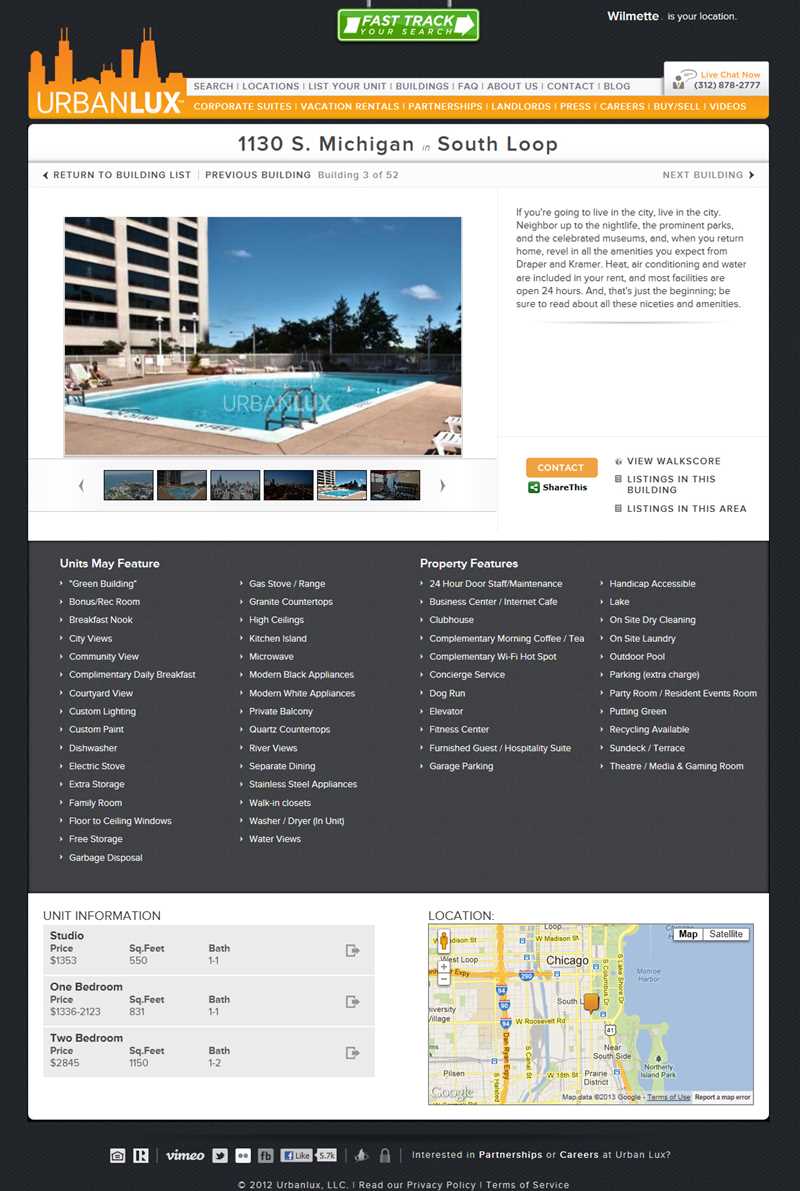 Urban Lux’s website has often-inaccurate information at its website about 100s of buildings, many of which aren’t even rentals, and hasn’t received permission to advertise a number of those buildings. We reported one such instance involving a number of buildings back in April of last year. Here’s the email response I received after notifying a major landlord that doesn’t do business with Urban Lux that one of its buildings was advertised on Urban Lux’s website:

In our April post we noted Urban Lux’s listing its license number as the license of an agent who we speculated was on a 120-day permit. The agent in question began with Urban Lux in March of last year, by her own report, and received a Leasing Agent license on August 28, perhaps after taking the legally-required hiatus. It’s been my experience, however, that the 120-day period is often ignored in Chicago, and the permit is indirectly responsible for many of the rental service industry’s shortcomings.

There’s much more to be said about Urban Lux, and we’ll say some of it in future posts. In the meantime, if you’re a landlord or management company whose buildings aren’t being accurately represented in Urban Lux’s Craigslist ads, or are advertised with proper authority, head over to Craigslist and begin flagging the ads. If you’re adept at understanding Craigslist’s Terms of use and spot any Urban Lux violations, flag them. Craigslist users have had substantial success at reducing the number of spam ads from Rent Proactive.

Urban Lux isn’t one of the more sophisticated Craigslist spammers, and it’s easy to find all of the company’s Craigslist ads despite its having cast most of the content as a jpg file. Type ULBW into the search box at apts/housing for rent. You’ll find a property address at the bottom of each ad. Add that address to the ULBW tag to find active ads for a specific property.

NOTE: At the margins YoChicago competes with rental services for landlord marketing dollars, so we have an indirect financial stake in keeping the competition honest. Make whatever you will of that.