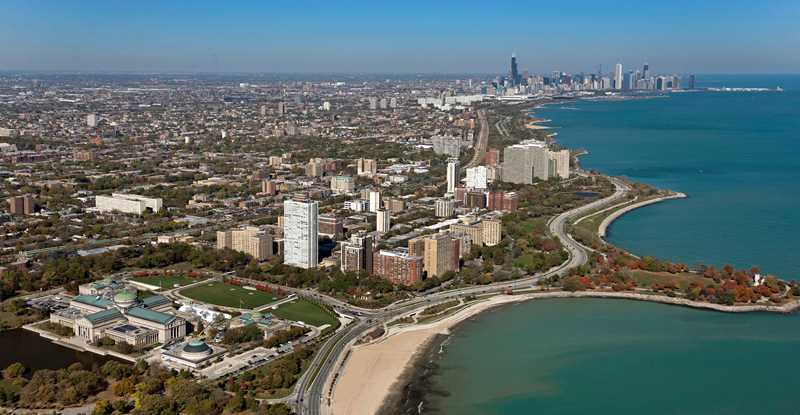 Many confirmed North Siders have never visited Hyde Park / Kenwood, and it’s probable that even fewer have given any thought to moving there.

We think Hyde Park / Kenwood merits at least a visit. A rapidly developing 53rd Street and the new City Hyde Park development will only add to the neighborhood’s lengthy list of existing attractions. The lakefront and parks are close at hand. The restaurant and bar scene is relatively healthy and expanding. Housing is price-competitive and often superior in quality to what’s available in an area like Edgewater that’s equidistant from the Loop. CTA express buses and the Metra Electric offer a quicker commute to the Loop than the Red Line or bus service from Edgewater.

The modernist towers of Regents Park , 5020-5050 S Lake Shore Dr, house over 1,000 apartments and share a lavish suite of amenities.

The Shoreland, 5454 South Shore Dr, is a Hyde Park landmark. Its grand lobby was one of the centers of neighborhood social life.

The Sutherland, 4659 S Drexel Blvd, was built as a hotel, briefly converted to a military hospital, and for years hosted a music venue frequented by jazz greats.

Windermere House, 1642 E 56th St, was once one of Chicago’s most luxurious hotels.

Note: The video tours were originally sponsored by Mac Property Management, which manages 1,000s of apartments in the Hyde Park / Kenwood area.