What would Fox & Obel mean for South Loop? 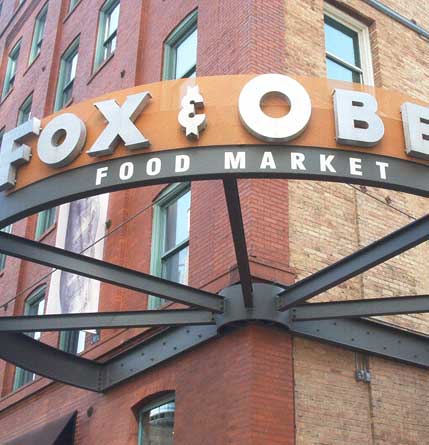 As comments on our recent post pitting the South Loop against the West Loop revealed, South Loopers still lament the lack of retail, boutiques and restaurants in their growing neighborhood. Mostly, this kind of commercial growth is gradual in a “new” neighborhood, but some additions count as major milestones – the opening of a large grocery store or a Starbucks, for example, can have a psychological impact far beyond its actual utility.

So we were intrigued by today’s Chicago Sun-Times story that gourmet grocer Fox & Obel may open a store at the northeast corner of Wabash and Roosevelt, a 34,000-square-foot site that is currently vacant. Fox & Obel CEO Keith Montague did not confirm the possible opening.

The store has been in its Streeterville location at 401 E Illinois St for six years, and nearby residents consider it a key neighborhood asset. The high-end shop offers gourmet grocery items – locally grown organic produce, prime beef aged on site, fined imported cheeses, etc. – as well as cooking classes and a to-go section of prepared foods that rivals many restaurants.

If Fox & Obel does come to the South Loop, no one will be happier about the addition than real estate developers struggling to sell condos in a crowded market. Anyone who has been to the Streeterville store knows that the guys behind it are no dummies. If they’re betting on the South Loop – wisely or not – homebuyers will take notice.