Where Chicagoans go when they leave 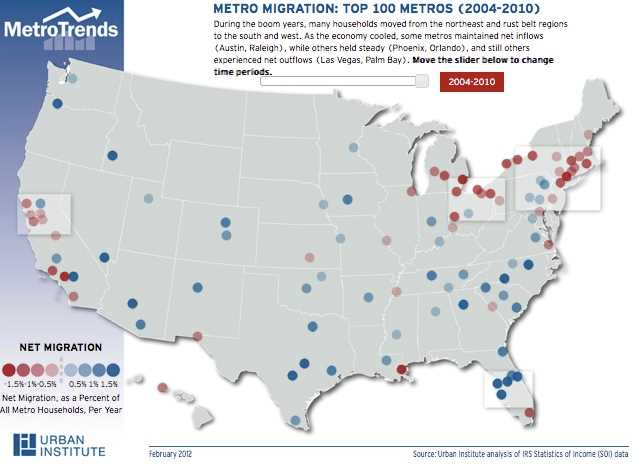 A while back we suggested that all our exes live in Texas, putting a waggish spin on Joel Kotkin’s contrast of Texas’ cities “growing population, a solid and expanding job base and a relatively efficient city administration” with Chicago’s “continued loss of jobs, decaying infrastructure, rampant corruption and continued out-migration of the area’s beleaguered middle class.”

Texas, it turns out, isn’t among Chicagoans’ top three choices for their next home.

From 2004 to 2010, according to MetroTRends, Chicago experienced net out-migration among urban areas, and the post popular destinations for departing Chicagoans were New York, Phoenix and Los Angeles, in that order.

New York and Los Angeles also experienced net out-migration during that time span, but Chicago wasn’t one of the top 3 destinations for New Yorkers or Angelenos. Phoenix had net in-migration and Chicago was the third most popular choice for migrating Phoenicians.

A hat tip to The Atlantic Cities for bringing this data to our attention.