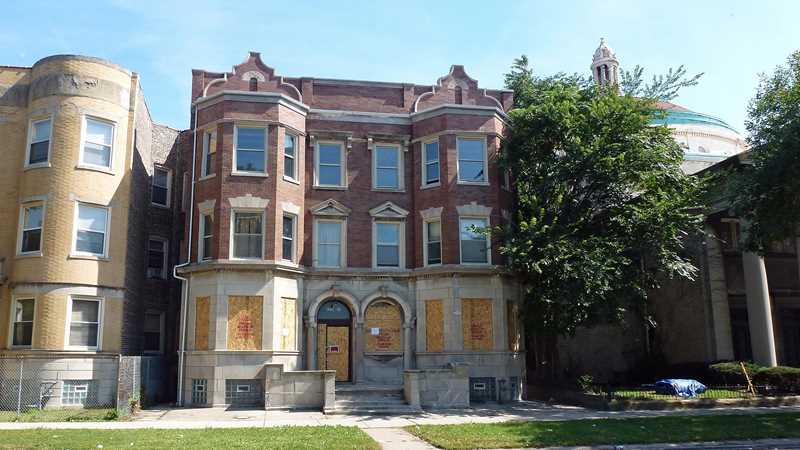 Unit 4N at 4441 S Indiana just came on the market for $79,900, in the Grand Boulevard neighborhood of Bronzeville.

It seems an attractive price for a condo that sold for $250,000 in May of 2006, and that’s touted by the real estate agent as able to satisfy the “pickiest buyer.”

The property has recently gone through a foreclosure and is apparently bank-owned. Three of the other units in the 8-unit building have been the subject of foreclosure proceedings.

I visited the immediate area last September, and spotlighted a unit (pictured above) whose value had plummeted from $315,000 to an asking price of $9,900. It sold for $10K in February and resold two months ago for $56,000.

Saturday’s Tribune reported a series of major drug busts, including one targeting an area of 43rd St, just north of the properties:

The relationship between gangs, drugs, and violence is longstanding,” said Chicago Police Superintendent Garry F. McCarthy. “Only a collaborative, comprehensive, and unrelenting approach will diminish it, as we are seeing in our strategies to target drug markets devastating communities affected by gang violence.”

In the Wentworth district, officers “dismantled” a drug operation that yearly sold more than $2.3 million worth of heroin, crack cocaine and cannabis, police said. Police targeted the area along 43rd Street between Michigan and Calumet avenues which were frequented by street gangs.

Does this drug bust have an impact on property values, assuming anyone believes the gangs will move on from the area?

EveryBlock is an easy way to check what’s happening in the immediate area, but you really ought to visit and walk around to get a feel for the scale of the devastation the neighborhood has experienced.