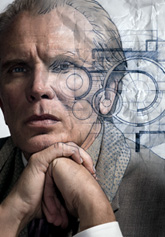 Those of you who don’t want to brave the winds and the crowds and the cheap, picked-over tchotchkes that pass for holiday gifts can enjoy a civilized early Christmas present through this weekend. The Goodman Theatre‘s production of Frank’s Home, a one-act play about famed architect Frank Lloyd Wright, concludes its run with evening performances today through Saturday (there’s also an afternoon matinee on Saturday). For $35, you get to see Peter Weller— yeah, the guy who played RoboCop— as Wright in the summer of 1923, when the architect forsook Chicago for California. Throughout the play, as Wright tries to reconnect with the children he abandoned, the master of organic architecture awaits the fate of his recently completed Imperial Hotel in Tokyo, which has just been ravaged by the Great Kanto earthquake. Wright’s former mentor, a washed-up Louis Sullivan, also figures into the story.