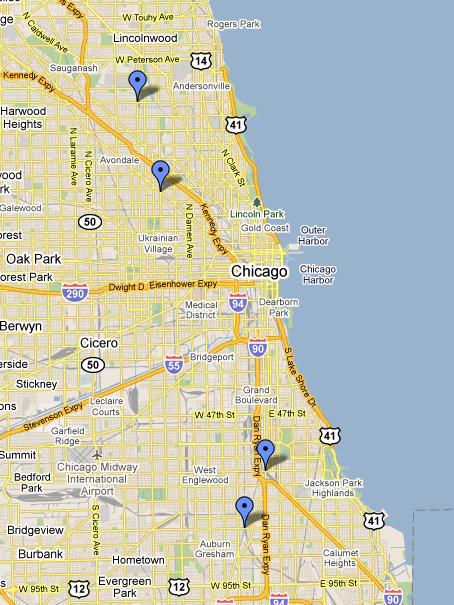 A new Mayoral Candidates Brief (PDF) issued by LISC/Chicago‘s New Communities Program identifies 34 projects and programs throughout the city “that can provide the new mayor with real solutions to the tough issues that will greet him or her on day one.”

One of those programs focuses on transit-oriented development — both the construction of new homes near existing transportation depots and the creation of new depots near existing homes. The memo names four specific projects in Auburn Gresham, Albany Park, Logan Square, and Washington Park:

a. 79th at Rock Island Line – A $2 million grant from the Illinois Department of Transportation is supporting preliminary community planning for a new Metra station and surrounding development at 79th Street at Parnell Avenue in Auburn Gresham, at the Rock Island tracks. The 79th Street bus route is targeted by the CTA for Bus Rapid Transit service; it is the city’s busiest route with 32,000 riders per weekday.

b. Brown Line Terminal – Albany Park organizations are partnering with the CTA, Neighborhood Capital Institute, Jones Lang LaSalle and elected officials to gain funding for a feasibility study of a mixed-use complex to be built above the Brown Line rail yard at Kimball, which serves 1.1 million riders per year.

c. Milwaukee and California – Logan Square Neighborhood Association is working to create a community-driven plan for redevelopment of vacant blocks and foreclosed parcels near the California Blue Line station.

d. 63rd Street Corridor – Washington Park is working with the City of Chicago and the Regional Transportation Authority on a $120,000 study of transit-oriented development along the underutilized section of 63rd Street that connects Woodlawn, Washington Park and Englewood. Also in the corridor are an intermodal freight yard and vacant industrial land that could have economic development potential.

The 34 projects mentioned in the brief “are not a wish list. They represent real capacity, real partnerships and in most cases, real investment already in place to move them forward in the years to come.”

Earlier in the memo, LISC outlines the problems NCP participants have faced in recent years: