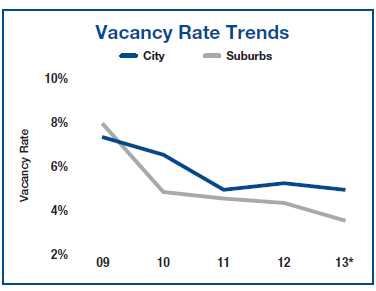 Fueled by strong demand in The Loop and Lincoln Park / Lakeview submarkets, vacancy in the city decreased 130 basis points in the first quarter to 3.9 percent. Vacancy in Lincoln Park/Lakeview was 2.6 percent, while a 4.7 percent reading was posted in The Loop. Over the past year, vacancy in the city declined 70 basis points, primarily reflecting additional occupied units in Southeast Chicago.

Average rents in the city rose 1.7 percent in the January-to-March period to $1,376 per month and are up 4.9 percent year over year.

Outlook: The arrival of new rentals will unlock pent-up demand and support a 20-basis point drop in vacancy to 5.0 percent this year. Average rents will advance 4.3 percent to $1,411 per month. 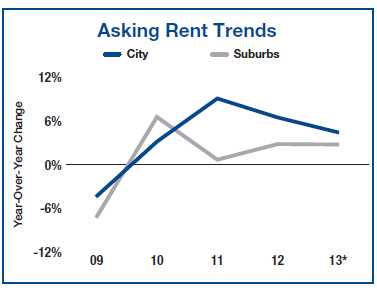 The Lincoln Park / Lakeview and Streeterville / River North submarkets had the lowest vacancy rates, at 2.6% and 4.1% respectively, and the highest year-over-year rent increases, at 6.4% and 9.2%, respectively.

Free registration is required to access the full report.