Homes on the horizon The real-estate downturn of the past year has affected every type of new-construction project and gut rehab within Chicago’s city limits, and the high-rise market is no exception.

Most of the residential high-rise projects New Homes listed in its March 2008 high-rise feature are still moving forward, but in almost every case, sales at those developments appear to have slowed to the point that buyers may not see many developers begin construction by the end of the year.

We’ve added just two new towers to our “horizon guide” in the past five months: the much-publicized Chicago Spire, which will be the nation’s largest building when complete, and 3033 North Sheridan, a rehabbed apartment tower in Lakeview East.

The Spire, of course, has garnered plenty of press for its size (almost 1,200 condos spread out over 150 stories) and for Santiago Calatrava‘s distinctive “unicorn horn” architectural design. Shelbourne Development kept a tight lid on sales information during its worldwide sales tour this spring, but the company in June reported that it had sold 352 of the Spire’s units.

The Spire’s homes range from small studios to four-bedroom homes. Price points stretch from the $750s to a rumored $40 million.

At the other end of the spectrum is Kroupa Development’s 3033 North Sheridan, which offers as-is homes with views of Lincoln Park and Lake Michigan for as low as the $140s.

As those projects arrived on the scene, however, several others disappeared. Lennar Urban’s Parc Huron, Related Midwest’s Canyon Ranch Living, and Terrapin Properties‘ Residences at Burnham Pointe were just a few of the towers that fell off our list after developers canceled the projects or turned their for-sale condos into rental apartments.

According to the Appraisal Research Counselors’ first report on condominium development in 2008, 8,222 new condos were for sale in downtown Chicago at the end of March, marking a 73-percent increase in unsold units from 2005. This means that developers most likely will stick to selling off the inventory from the towers they’re currently building instead of announcing new projects. The report also concedes the possibility of more project cancellations in the near future.

So what does this all mean for the buyer who’s dreaming of a penthouse (or even just a studio) in the Windy City sky? For now, it appears to mean the prospect of some cushy incentives, such as credits toward upgraded finishes or discounted parking spaces. Home prices aren’t falling, however, and most developers insist that they have no plans to cut those prices and undermine buyers who are currently under contract.

For example, construction on the Gammonley Group‘s 757 Orleans @ Chicago recently topped out and will begin delivering late this year. The 22-story, 198-unit building near the intersection of Chicago Avenue and Orleans Street is more than half sold, and buyers can get $5,000 towards upgrades on finishes with the purchase of one of its remaining residences. Price points for the condos range from the $240s to the $530s, and penthouses start in the high $700s. Sedgwick Properties is promoting a couple of incentives at its new South Loop tower, Marquee, located at 1454 S Michigan Ave, including an offer to “live free all summer long.” Sales agent Norge Clemente from Koenig & Stray GMAC Real Estate says that buyers will be able to move in immediately and delay closing on units for two or three months.

It can be difficult to get buyers to sign contracts for condos in developments that are either under construction or that have yet to break ground. This incentive reinforces the notion that buyers in this market need material evidence that developers will deliver on their end of the deal.

The other incentive offered at Marquee is $15,000 off of two different floor plans: a two-bedroom normally priced in the $350s, and a three-bedroom on the northeast corner priced in the low $500s.

Just 27 of the 208 units in the building are still available. Many are ready for immediate deliveries, as people are already living in the lower floors, but some interior construction is still being done on the upper floors.

Buyers looking for homes in architectural standouts are running out of choices in Streeterville and the New East Side. Anyone who wanted the distinction of owning a new home in the Helmut Jahn-designed 600 North Fairbanks had only eight options as of late July.

The only unsold units at Schatz Development‘s Streeterville high-rise include two-bedroom penthouses on the 37th, 38th and 39th floors, according to sales agent Jennifer Owen. The homes have 1,832 square feet of living space, 2.5 baths, 12-foot ceiling heights, and outdoor terraces, and are priced from $1.02 to $1.29 million, she says.

All of the units are finished and ready for immediate delivery. Parking is available for $57,500 to $65,000, depending on the unit purchased. 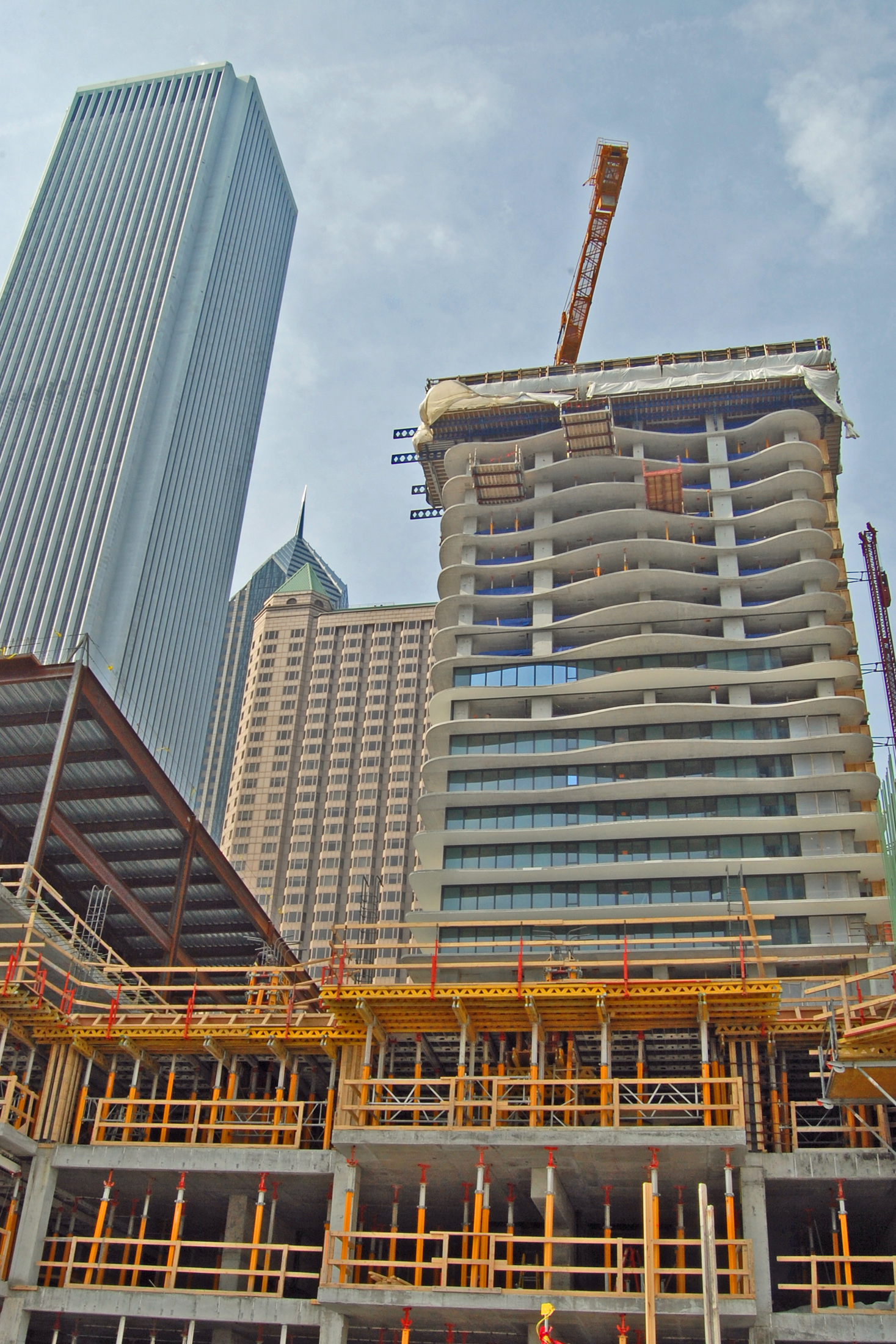 Likewise, sales at Aqua, Magellan Development‘s rippling high-rise at 225 N Columbus Dr in the Lakeshore East mega-development, had reached the 90-percent mark by late spring. Most of the remaining residences ranged from 1,176 to 1,756 square feet, with prices starting in the $660s and reaching to more than $1.5 million. Deliveries at Aqua will begin in 2009.

In the Loop, more than 30 of The Legacy at Millennium Park’s 72 stories are up and are easily visible from Millennium Park, says sales manager Adrian Hulse. This is important, of course, because the Legacy fronts Wabash Avenue, not Michigan Avenue, and some clear sight-lines will go a long way toward legitimizing the Millennium Park connection that Mesa Development emphasizes.

Construction crews are pouring a floor every three days, Hulse says, and the building is still on track to completion in September 2009. 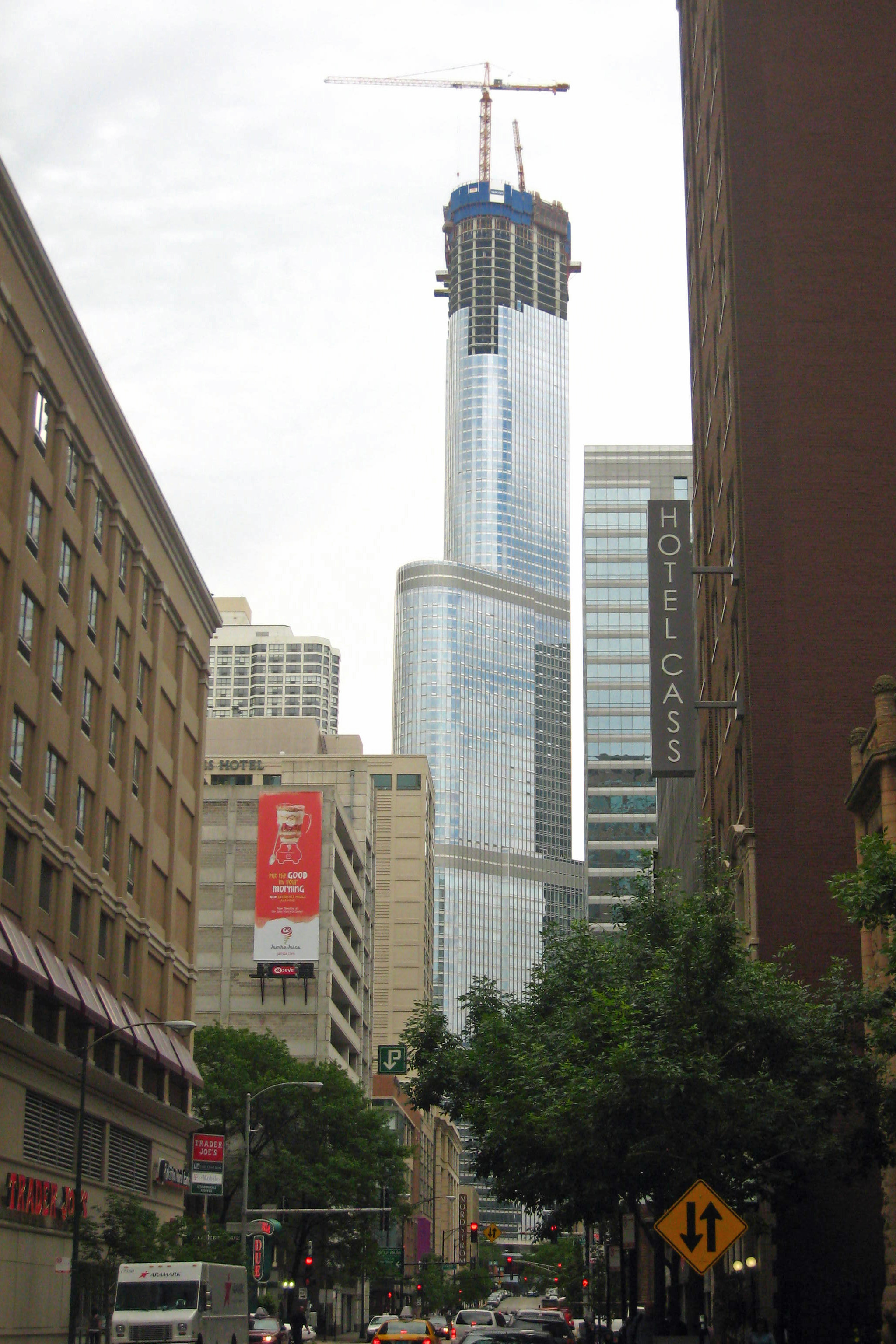 Anyone who has glanced at the River North skyline near the Chicago River has seen the Trump International Hotel and Tower Chicago continue is rise into the sky. The hotel portion of the steely blue 92-story tower opened for business in late April, allowing buyers to get an early look at the building’s impressive city, river and lake views and visit its collection of five-star amenities like the restaurant Sixteen, the Rebar lounge and the Spa at Trump.

Trump, located at 401 N Wabash Ave, comprises 486 luxury residences and 339 hotel guestrooms, with sizes running from 580 to 6,800 square feet. Prices range from the $580s to more than $9 million. Approximately 75 percent of those homes have sold.

In 2006, the Ritz-Carlton Residences high-rise made headlines for its Trump-topping average price per square foot. The Ritz’s super-luxe condos, under construction at 664 N Michigan Ave, clocked in at a whopping $1,076 per square foot, a whole $36 more on average than Trump’s residences. The Spire is sure to take the cake for the most expensive homes per square foot, but it’s safe to say that the Ritz is still near the top of the heap.

Approximately 39 of the tower’s 86 units have sold, and the project is beginning to run low on its least expensive one-bedroom homes, says sales agent Jane Shawkey. Moving up the ladder in both price and size, a few of the lowest-priced two-bedrooms are still available starting at $1.9 million. The 1,882 square-foot units have views to the east onto Michigan Avenue and to the north toward Oak Street Beach.

Prices for the rest of the Ritz-Carlton’s two- and three-bedroom condos make their way well past $3 million, and its sky-high, half-floor penthouses can go for as much as $13 million.
The 40-story building should be ready for first deliveries by July 2010, Shawkey says.

High-rises aren’t relegated solely to downtown and the North Side’s shoreline, of course. Another Studio Gang-designed tower, the 26-story Solstice on the Park, is planned for 5526-5540 S Cornell Ave in Hyde Park. Solstice’s @properties marketing team opened a sales center in early May, and developer Antheus Capital hopes to have the tower ready for deliveries in 2010.

Studio Gang’s design calls for a facade of angled windows that allow sunshine into Solstice’s 145 homes during the cold winter months while keeping the units shaded and cool throughout the summer.

The smallest two-bedrooms at Solstice on the Park have approximately 1,500 square feet, and the largest home will top out at around 3,500 square feet. Pre-construction prices run from the $500s to almost $2.3 million.