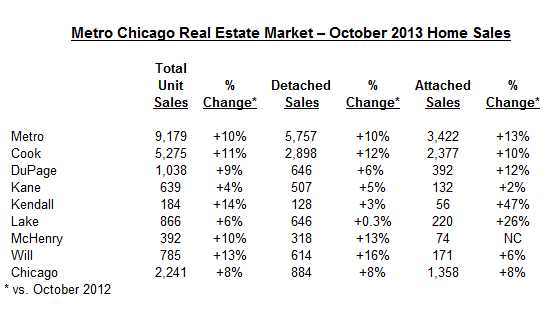 October home sales in the metropolitan Chicago real estate market extended the trends that have characterized the local market in 2013. Both the median sales price and the number of homes changing hands increased when compared to the same month a year ago. Time homes spent on the market declined, RE/MAX reported.

The October median home sales price rose 15 percent to $176,000, and the number of home sales increased 10 percent to 9,179 units. Those results indicate that the market is maintaining its solid upward momentum even though October increases weren’t quite as strong as those achieved in the July-September quarter when the median sales price rose 16 percent and closed sales were up 31 percent. That shift is in line with historic norms, as housing market activity often declines somewhat in the fourth quarter.

Homes sold in October spent an average of 95 days on the market before going under contract, compared to 140 days a year earlier.