Pain might be ending for Chicago’s lowest Case-Shiller tier 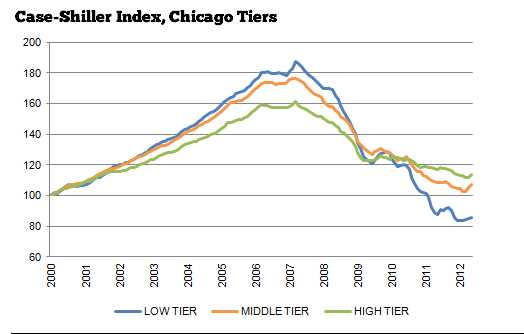 One thing to watch in the Case-Shiller home price index is the tiered breakout. S&P assigns each pair in the paired-sale analysis to the top, middle, or bottom third of pairs, based on each home’s first selling price. A separate index is constructed based on high, middle, or lower-value homes.

In the last few months (which are published on a two month lag), the index has turned slightly upward. There have been two-month periods where the index rose slightly, only to resume plummeting for many months afterward. So this is not a guarantee. But it might, might be possible that the pain is over for the lowest tier.

More on city-wide house prices and volume can be found at Lakeshore Analytics.