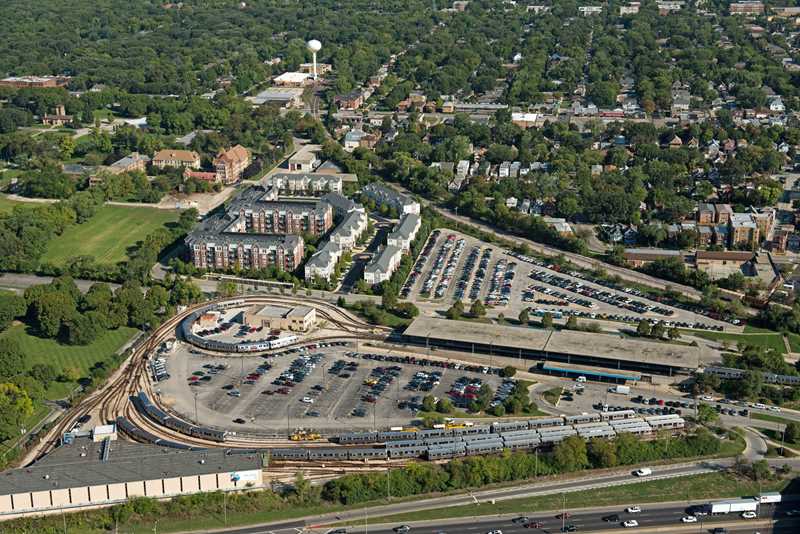 Home sales in the metropolitan Chicago real estate market delivered a clear message in 2012: the real estate recovery is underway, according to an analysis by RE/MAX.

In the seven-county metro Chicago area, home sales in 2012 totaled 89,039 units, up 27 percent from the 70,215 homes sold in 2011. It was the largest transaction total for any year since 2007 when 92,328 sales were recorded. Home sales statistics used in the RE/MAX analysis were compiled by Midwest Real Estate Data, LLC, the regional multiple listing service.

Fourth-quarter sales in the metro area totaled 23,318 homes, 34 percent more than in the same three months of 2011. The median sales price of $154,000 represented a 3 percent increase on the same basis. The fourth quarter also resulted in a sizable reduction in average market time (the average number of days that homes sold during the period spent on the market before a sales contract was signed), which shortened to 138 days from 171 days one year earlier.

The improved sales activity was evident throughout the seven-county area in the fourth quarter, with all seven counties generating at least a 24 percent increase in homes sold when compared to the same period in 2011.

Cook County, which accounted for 57 percent of all transactions during the quarter, had the most positive results. Sales activity rose 36 percent, and the median price was up 7 percent. Much of the gain in the Cook County median price is attributable to the City of Chicago, where the median price rose 13 percent to $175,000. 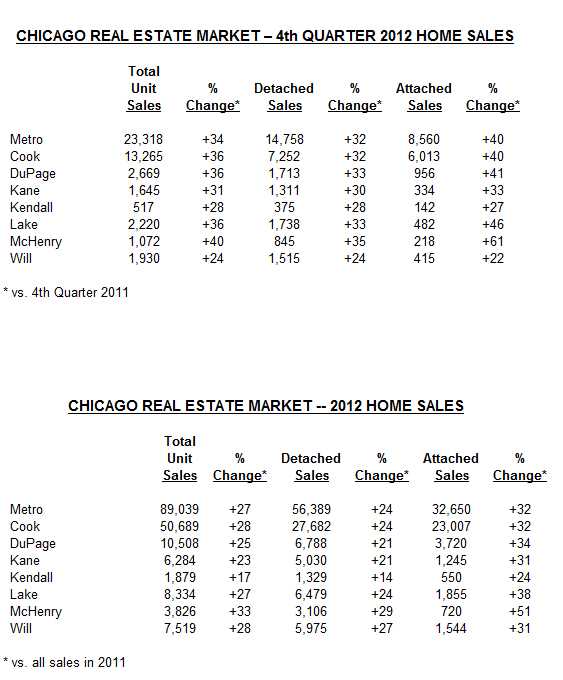 Distressed Sales
Distressed properties, whether sold through foreclosures or short sales, accounted for 41 percent of all 2012 home sales compared to 42 percent in 2011.

Detached Homes
Boosted by a 32 percent increase in the fourth quarter, sales of detached homes in the seven-county area totaled 56,389 units in 2012, 24 percent more than in the prior year. A trend toward firmer prices was evident in the fourth quarter when the $170,000 median price was 3 percent higher than during the same quarter in 2011.

Across the metro area, the average market time for detached homes improved from 166 days in 2011 to 146 days in 2012 and dipped to 136 days in the fourth quarter of the year.

Attached Homes
Sales of attached homes (primarily townhouses and condominium apartments) rebounded strongly in 2012. For the full year, sales activity climbed 32 percent to 32,650 units, while in the fourth quarter the gain was 40 percent on sales of 8,560 units.

Sales prices for attached homes showed renewed firmness in the fourth quarter, with the median price registering a solid 5 percent gain to $124,000.

The fourth-quarter median price was up sharply in Cook County and Chicago, where most attached units are sold. The median price rose 18 percent in Chicago and 10 percent in all of Cook County, while in McHenry County the median held steady. There were small declines in Kane County (down 1 percent), DuPage County (down 2 percent) and Lake and Will counties (down 3 percent), along with a 12 percent decline in Kendall County.