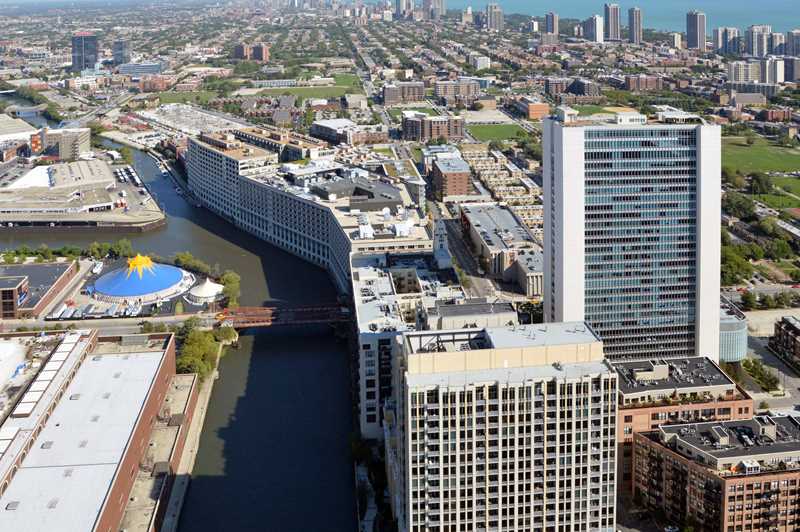 The Montgomery, 500 W Superior St in River North, was built in 1972 as an office building for Montgomery Ward & Co. The 28-story building was converted to residential condominiums in 2005, and is one of the more upscale buildings in the western part of River North.

The 245-unit Montgomery has a mix of 1-, 2- and 3-bedroom units, and a few larger combination units. 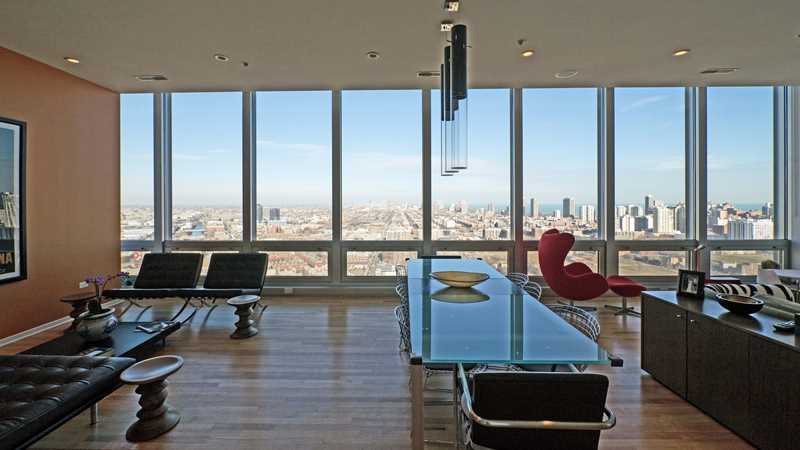 One-bedrooms have a bath-and-a-half. The second bedroom in most of the 2-bedroom floor plans is on the interior and has borrowed light rather than windows. Ditto for the 3rd bedroom in 3-bedroom units. The building’s large, windowless corner shear walls enclose closet, bath, laundry and other utility spaces in the units.

Only the east- and west-facing units have balconies. Several penthouse units have private rooftop terraces. There are fireplaces in some of the higher-floor units.

Heating and cooling to the units are provided by a 4-pipe fan coil system. That’s an important consideration in a building with an east – west axis where conditions can vary widely on the north and south sides of the building. Units have a sprinkler system for fire protection. Units have gas stoves and cooking gas and cable TV are included in the assessments. 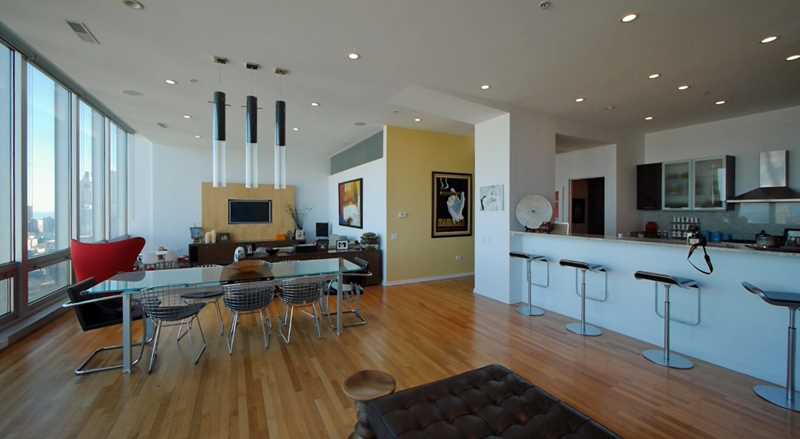 Many of the units in the building have been extensively customized and reconfigured, and several represent the work of noted designers.

There are typically a half-dozen or more units for sale in the building. Resale prices have ranged from the high $200s to more than $2 million.

The Montgomery has a full complement of amenities except for a pool. 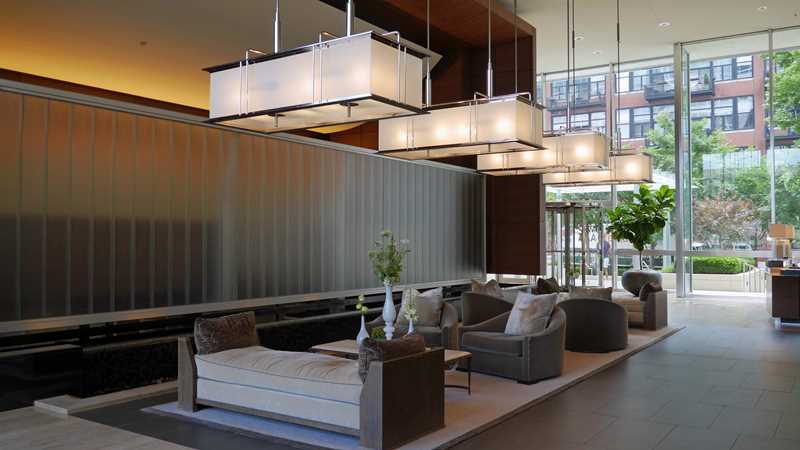 Residents are greeted by a striking lobby with 26-foot ceilings and glass walls on the north and south. The lobby hosts a changing mix of artworks. Door staff is on duty 24 hours daily. 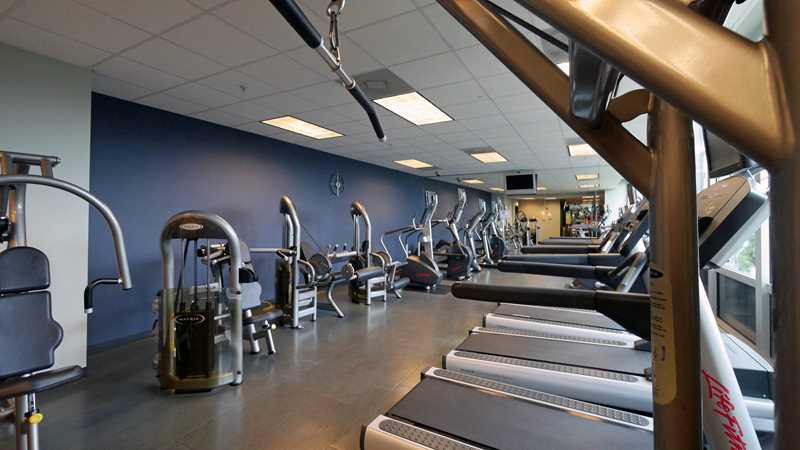 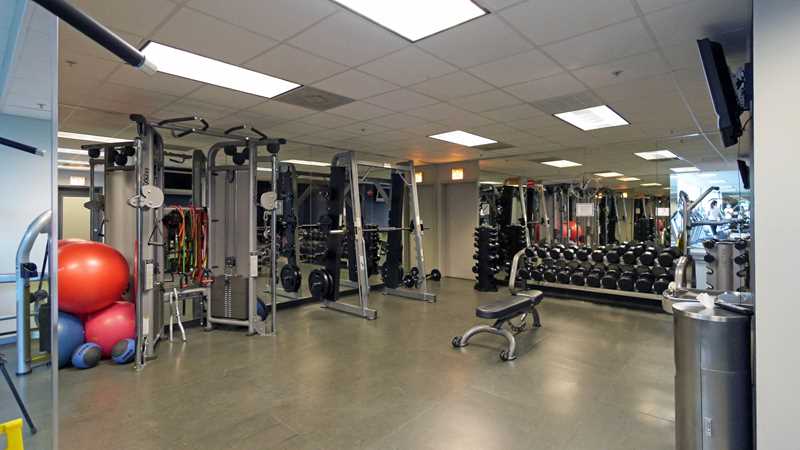 There’s a nicely-equipped fitness room with a wall of windows overlooking a park-like acre to the north. The 27th floor party room has a full kitchen. A bicycle storage room is separate from the garage. 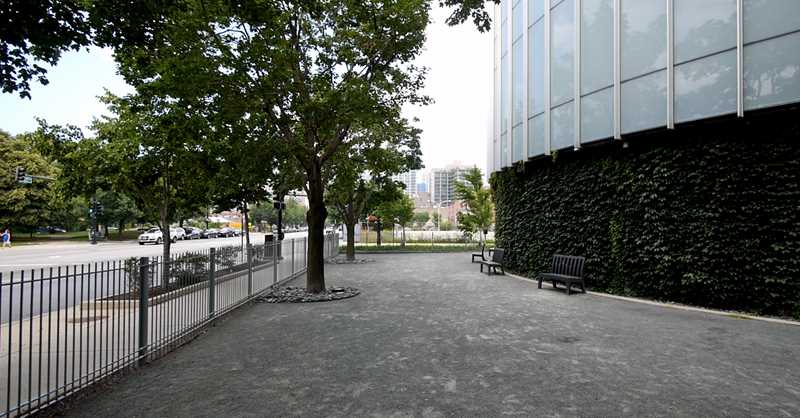 There’s an unusually large, enclosed dog run on the north side of the building.

The building bills its rooftop sundeck as an “observation deck,” but that’s a stretch. Or perhaps, given the scarcity of comfortable seating, it’s an accurate description of how the area is best used. Safety railings and barriers, some of which form a Japanese garden, limit the views from the roof.

A dry cleaners is adjacent to the lobby and open six days a week.

The building has four passenger elevators and a service elevator.

Pets. Dogs and cats are allowed.

Parking. There are 350 deeded parking spaces in a heated garage located on floors 2 through 5 and in the basement. Guest parking is not available in the building.

Management. The Montgomery is professionally managed by Draper and Kramer, and has an on-site manager.

The Montgomery is in a relatively tranquil residential pocket of River North near the neighborhood’s northwest edge. 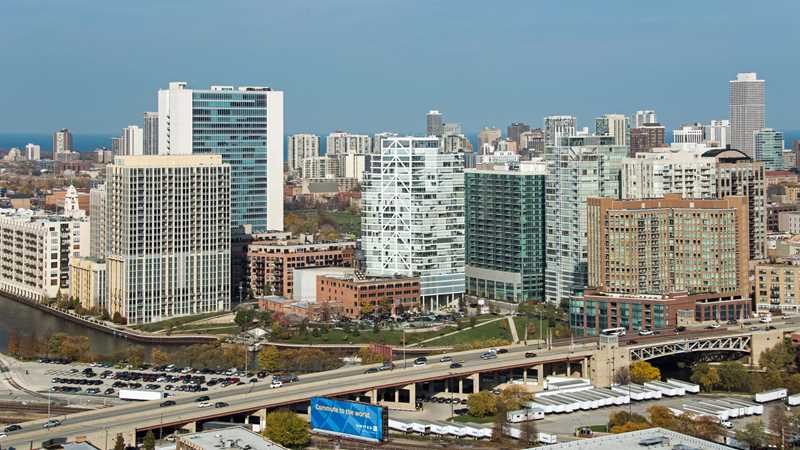 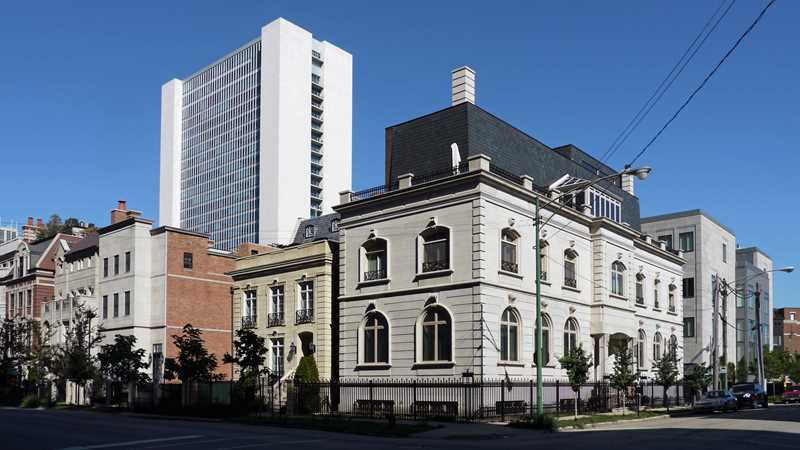 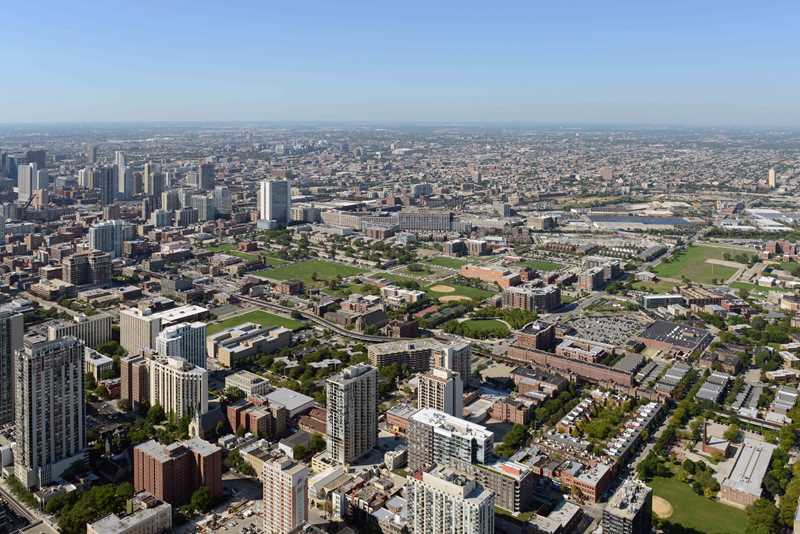 The Cabrini-Green high-rises, once a blighting factor in the area, have all been demolished. All that remains of the infamous development are the row houses, plans for which are uncertain.

WalkScore gives the location a “Walker’s Paradise” score of 94, a Transit Score of 88 and a Bike Score of 70. The popular East Bank Club is a 10-minute walk.

If you work at Groupon or Dyson you can’t beat the location – they’re almost directly across the street.

A knowledgeable developer opines in the above video that Chicago Avenue east of The Montgomery is poised to become a hot corridor for development. 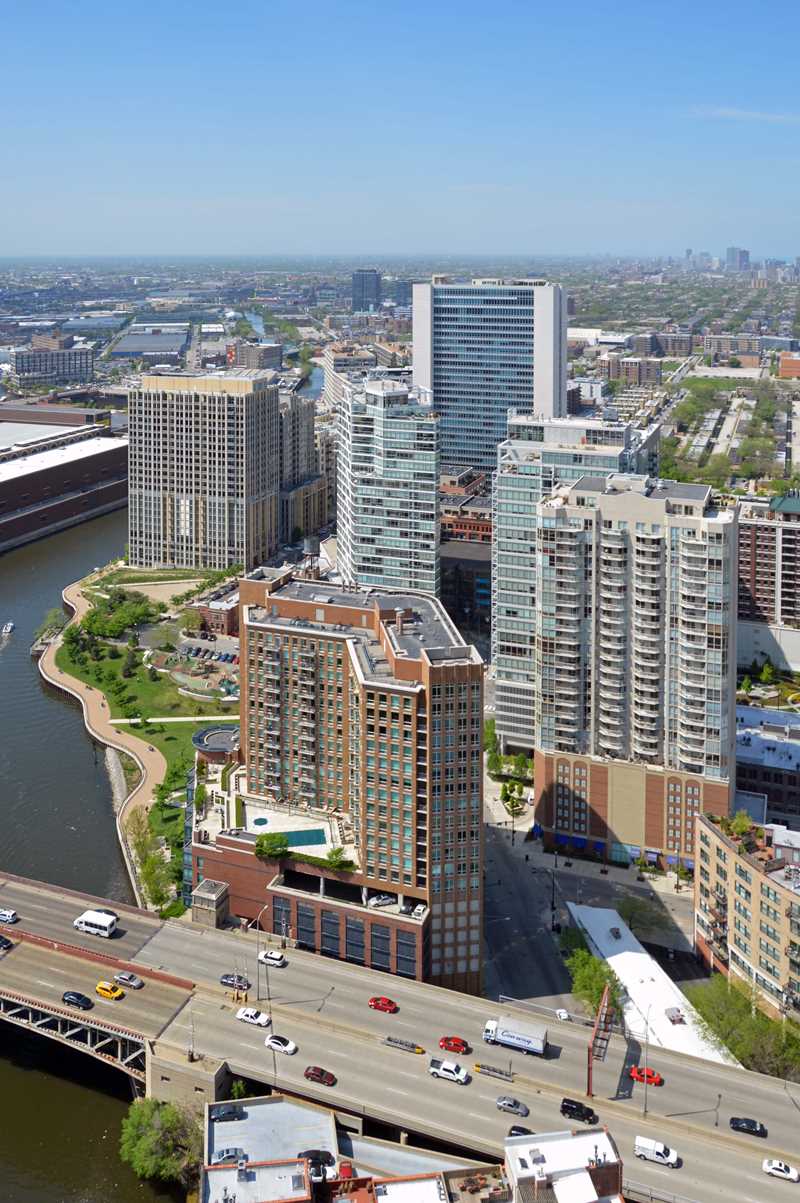 Parks. Parks are scarce in River North, but The Montgomery is only two short blocks north of A. Montgomery Ward Park, known to the locals as Erie Park. The 3-acre park fronts the Chicago River and has an elaborate playground and an adjacent dog-friendly area. The park’s sloping site makes it an ideal venue for Movies in the Parks.

There’s riverfront access a block west of the building. Long-term plans contemplate the extension of the river walk to the north and south.

Shopping. The nearest grocery is a Walmart Express at 225 W Chicago Ave, but full-service groceries are abundant nearby, including Dominick’s, Jewel-Osco, Whole Foods, Treasure Island and Plum Market. A new Target is slated to open shortly on Division Street.

The location has easy access to shops along the Magnificent Mile, Oak Street and in the Gold Coast.

Dining. Residents at The Montgomery have a wide range of dining options within the immediate area, and scores more nearby in River North and the Gold Coast. 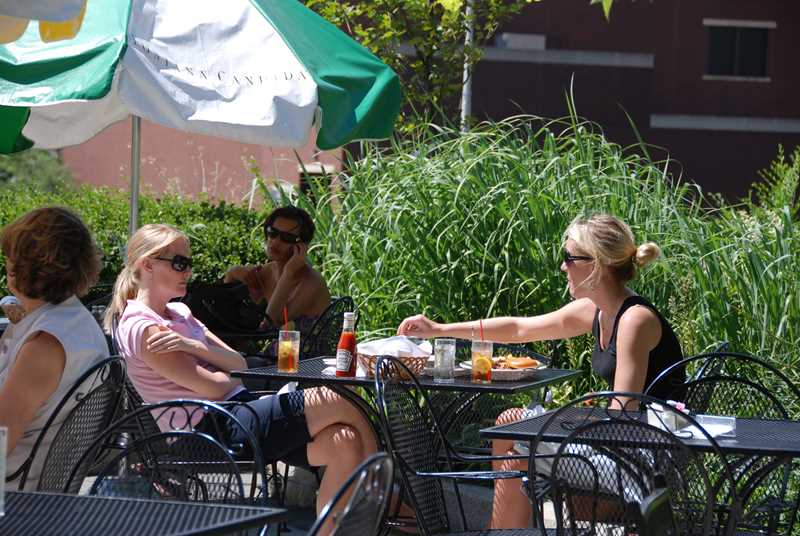 Views. The building’s location and its floor-to-ceiling windows provide outstanding views to the north and to the south.

North views are unobstructed; south views vary with a unit’s height in the building.

The dramatic east views will be impacted by the planned construction of an approximately 250-unit, 24-story apartment tower at 750 N Hudson.

Transportation. CTA Brown and Purple Line El stops are a few blocks east at Chicago and Franklin. The CTA’s #66 bus line runs east to Navy Pier and west to Austin Ave along Chicago Ave on the north side of the building.

The Ontario Street on-ramp, a few short blocks to the southeast, provides quick access to the city’s expressway grid. Cabs regularly cruise the area, and it’s rare to wait more than a few minutes for one.

The Montgomery was designed by Seattle-born architect Minoru Yamasaki (1912-1986).

Yamasaki was a prolific architect. He has been called an “architect of disaster” and is best known for two projects that have been demolished: the Pruitt-Igoe housing project in St Louis and the twin towers of the World Trade Center. The Montgomery receives few mentions in the many articles about his work on the web

The condominium conversion involved major changes to the original look of The Montgomery, to the extent that it is no longer Yamasaki’s work. According to the condo association’s website:

The facade between the travertine corners originally was a bronzed glass and black aluminum curtain wall. In 2004, the tower was renovated by Chicago-based Centrum Properties, with contributions from Skidmore, Owens and Merrill and Pappageorge/Haymes. The facade was removed and replaced with blue-green tinted glass and brushed aluminum accents. The new curtain wall provides residents with floor-to-ceiling windows and spectacular views of the Chicago skyline. Other highlights of the renovation include the addition of balconies to the building’s narrow lengths on the east and west sides and a 5-story circular parking ramp wrapped in glass.

A Chicago architect described the original dark bronze glass as having “a Darth Vader look.” Another critic opined that the makeover transformed the building “from an ugly duckling to a sophisticated swan.”

Midwest Construction outlines some of the challenges faced in converting the building from office to residential use.

And now for some non-essentials:

The narrow vertical windows of the building were said to have been inspired by the architect’s fear of heights.

The Yamasaki architecture firm closed amid a flurry of unpaid bills.

The Montgomery is one of only a few Chicago high-rises with travertine cladding on the façade.

The balconies on the east and west facades and the parking ramp were added during the conversion to condos.

The building’s 404-foot height is unusual for a 28-story building.

A never-built fountain and reflecting pool were part of the building’s original plan.

Alternatives to The Montgomery

If you’re attracted to the immediate area you’ll find a large number of alternative choices, both for sale and for rent.

As you’d expect, any building of this size has its fans and its foes, and aspects of living here that some might pan turn others into fans.

If you’ve lived at or visited The Montgomery (and are not a real estate agent), add your thoughts in a comment. Comments are moderated, and commercial messages are not allowed.

Chicago Avenue, the next hot neighborhood