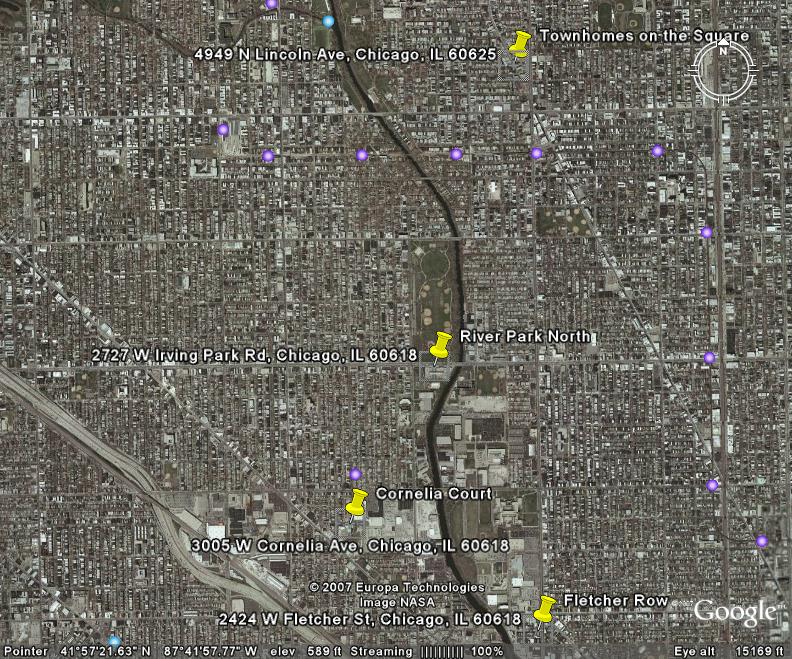 New Homes Magazine recently ran a feature on the ways in which the Chicago River has spurred residential building on the Northwest Side. We decided to take a look at development in that neck of the woods (really, there are woods up there), and were surprised to find that while there are more than 130 active condo developments on the market, only half a dozen townhouse projects are underway on the Northwest Side.

Four of the six townhouse developments do indeed follow the course of the river, though Townhomes on the Square, 4949 N Lincoln Ave, is a good six blocks east of that august waterway. These four developments are planned for anywhere from 20 to more than 60 units, and with the exception of Cornelia Court, prices all start somewhere north of half a million.

River Park North, as you might have guessed from the name, makes the most of the river as an amenity. It’s the only project that backs right up to the riverfront. With California Park next door (south of Irving) and Horner Park directly north (north of Irving), River Park North might win the Google Earth beauty contest – hard to beat all that open green (We’ll let you make your own judgments on the sidewalk beauty contest).

Here are the basics on these four Northwest Side townhouse projects. We’ll have more on the other two, which are more affordable and much farther northwest, shortly. Meanwhile, click on “Comments” below to give us your take on any or all of these, and let us know if we’re missing anything (can there really be only half a dozen townhouse projects in this massive swath of Chicago?).