Waiting for the wrecker's ball, or maybe not 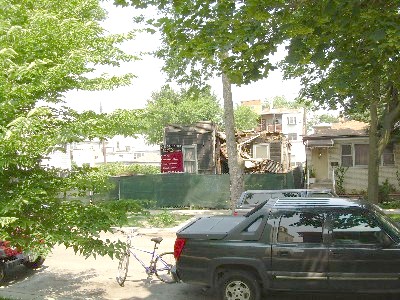 As reported here mere moments ago [at Yo, great minds are obviously on the same wavelength], you can find real-life examples of a famous New Yorker cover in various corners of the city [okay maybe not on actual corners, but in the middle of the block]. As with our lonely Victorian on Sheffield, you have to wonder why this tiny little postwar bungaranch on the 2400 block of Cullom [on right in photo, next to the demo site] is still standing.
Until about twenty minutes ago, on each of the three lots to the west of it stood an early 20th century frame house in some state of disrepair, but as the sign tells us, soon they all will provide foundations for one of three luxury single family houses.

At least with the Painted Lady wedged between two apartment buildings, you understand the desire to retain some element of character or charm, but this little edifice is one of the saddest housing types ever to emerge from some misguided architect’s drawing board; it’s not adding much to the streetscape. You’ve got to imagine the developer offered the adjacent owner at least as much as he paid for the other three lots, so the answer must be that for certain homeowners, no amount of filthy lucre can compensate for displacement.
The development squeeze play is an old story, really. Consider the super-exclusive Casino club, at the southwest corner of Delaware and Seneca, a building– and an institution — whose profile is so low that you have probably never even noticed it, even if you’ve lived in the city for years. 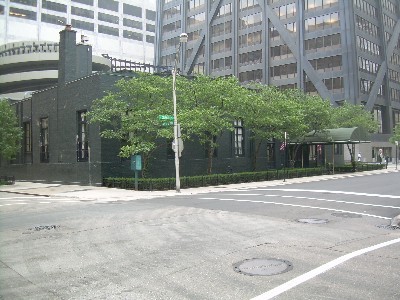 Do you really think that the developers of the Hancock building didn’t want the whole block when they assembled the site in the 1960s? Can’t you just see the the white-gloved ladies of the Casino chanting “We shall not be moved” outside the insurance company’s offices? All right, that’s probably not what happened, but there they remain all the same.
Yo will no doubt continue to report on this evolving phenomenon.