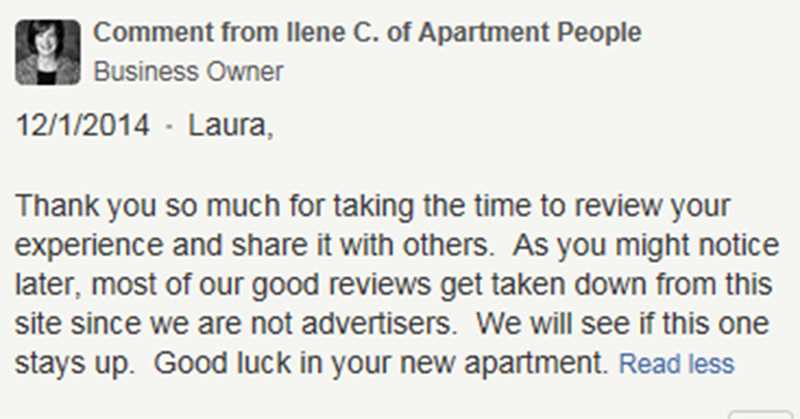 Ilene Collins, CEO of Apartment People, replied to a hyper-positive Yelp review by suggesting that the review might be taken down from the site “since we are not advertisers.”

As I read the review, the first from a new Yelper, I found myself unable to believe that it reflected an actual consumer experience with Apartment People. If Yelp removes the review, it’s likely to be because other Yelpers flag it as not being credible.

Apartment People has 100s of negative reviews at Yelp, many of which have also been removed.

It’s a serious matter to charge a company with the equivalent of a shakedown. And, yes, I’m aware that similar charges have been leveled against Yelp for years.

If Collins has any evidence that Yelp is removing positive reviews to encourage advertising, she ought to go public with it. Failing that, I think she’s simply slimed herself and her company.

Added 12/4 – The review in question has been removed and added to the filtered section, joining more than 500 other reviews of Apartment People in that section.