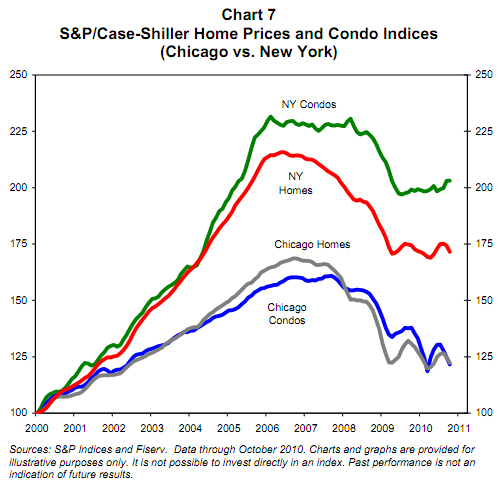 Standard & Poor’s new review of Case-Shiller 2010 home value data doesn’t have a lot of good news for Chicago. In fact, it devotes most of its “Condominium Prices” section to the city’s poor performance relative to places like New York, Boston, Los Angeles, and San Francisco:

Chicago has fared the worst, with condominium values now approaching early 2002 levels. In addition, as of October 2010, Chicago is the one market that is still close to its recent low in terms of annual rates of decline, at -11.8%, which is currently the lowest rate of all the markets. The other four markets have shown improvement in this statistic since posting their relative lows in 2009.

…The Boston and New York condo markets are doing better than their respective housing markets, as detailed in the annual rates of return. The opposite is true in Chicago, Los Angeles and San Francisco, with condo prices falling on an annual basis in all three markets.