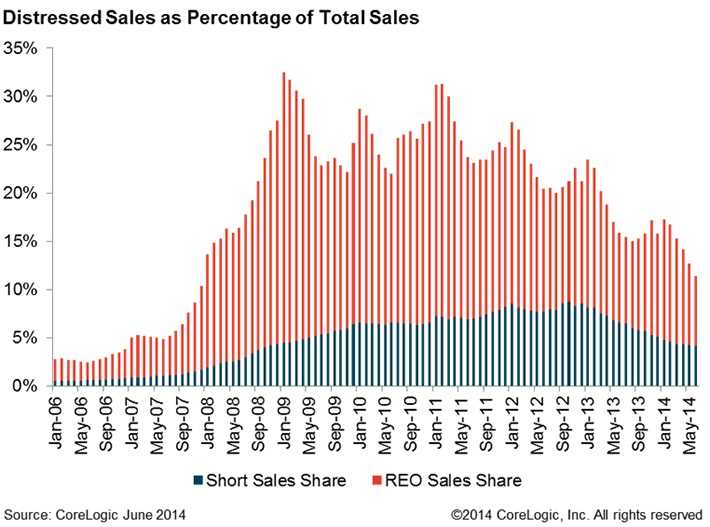 At its peak, the distressed sales share totaled 32.5 percent of all sales in January 2009, with REO sales making up 28 percent of that share. The more recent shift away from REO sales is a driver of improving home prices, as REOs typically sell at a larger discount compared to healthy sales than do short sales. There will always be some amount of distress in the housing market, so one would never expect a 0-percent distressed sales share, but the pre-crisis share of distressed sales was traditionally about 2 percent.

Of the largest 25 Core Based Statistical Areas (CBSAs) based on population, Chicago-Naperville-Arlington Heights, Ill. had the largest share of distressed sales at 27.4 percent, followed by Miami-Miami Beach-Kendall, Fla. (26.4 percent), Orlando-Kissimmee-Sanford, Fla. (24.8 percent), Tampa-St. Petersburg-Clearwater, Fla. (24.6 percent) and Las Vegas-Henderson-Paradise, Nev. (23.9 percent). Sacramento-Roseville-Arden-Arcade, Calif. had the largest drop in its distressed share, falling by 17.1 percentage points from 33.1 percent in June 2013 to 16.1 percent in June 2014.